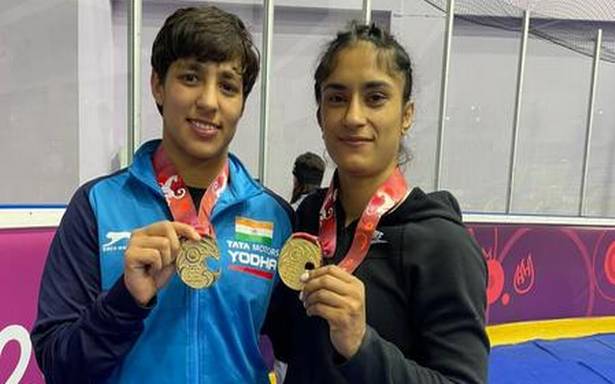 Divya Kakran emerged as the second Indian woman to secure two gold medals in the Asian wrestling championships on Friday as women wrestlers of the country returned four gold medals in Almaty, Kazakhstan.

A day after Sarita Mor became the first Indian woman to win two Asian titles, Divya, who had claimed the 68kg crown in New Delhi a year ago, took the gold in a depleted 72kg field consisting of just four wrestlers.

Olympic-qualified wrestler Vinesh beat Otgonjargal Ganbaatar of Mongolia 11-0 and Meng Hsuan Hsieh of Chinese Taipei 12-0 in the group stage. She reached the final as her Korean opponent Hyunyoung Oh forfeited her match due to an injury.

Vinesh then defeated Meng by fall to clinch her maiden title. “The main aim was to wrestle the Japan and China wrestlers, but they are not here. If there is a gold medal on the offering, I will take it,” she said.

Anshu cruised against Sevara Eshmuratova of Uzbekistan 10-0, Nazira Marsbek Kyzy of Kyrgyzstan 10-0 and Battsetseg Altantseseg of Mongolia 9-1 before overcoming Korean Shinhye Lee with a 2-2 scoreline.

Anshu again beat Battsetseg 3-0 in the final to claim her first Asian gold.

Sakshi, who could not win the 62kg Olympic weight trials and qualified in 65kg, lost the summit clash to Bolortungalag Zorigt of Mongolia via fall.