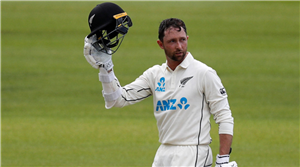 Devon Conway has broken a 125-year-old record held by the legendary KS Ranjitsinhji for the highest score by a batsman on Test debut in England. New Zealand debutant and opening batsman Devon Conway smashed multiple records — some dating back to the 1800s — during the first innings of the 1st Test vs England. He is currently batting on with the New Zealand tail, approaching a double century.

The South African-born 29-year-old carried on his record-breaking spree on Day 2, even as wickets fell at the other end. When he went past 154, he broke a 125-year-old record held by the legendary KS Ranjitsinhji for the highest score by a batsman on Test debut in England.

Highest Scores on debut in England:

Highest score by a New Zealand player at Lord’s

Highest scores by debutants in away Tests

He is also in line to have the highest carrying-the-bat score by a debutant.

Conway had already etched his name on the Lords honours board on Day 1 with an unbeaten century. He had also broken Sourav Ganguly’s 25-year-old record of the highest Test score on debut at Lord’s, when he went past 131. The left-handed batsman remained unbeaten on 136 as New Zealand finished the first day at 246 for three.