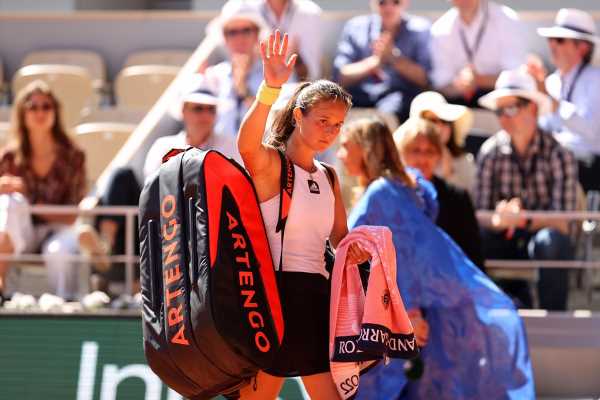 ‘I was too emotional today, and I couldn’t handle the nerves’

Daria Kasatkina put her crushing defeat by world number one Iga Swiatek down to nerves on Thursday but the Russian will leave Roland Garros in confident mood having reached her maiden Grand Slam semi-final.

The 25-year-old Russian, ranked 20th in the world, made 24 unforced errors — almost double her opponent’s tally – on a sun-baked Court Philippe Chatrier to lose 6-2, 6-1 in little over an hour.

“The thing is I was too emotional today, and I couldn’t handle the nerves the way I was able to do the previous matches,” the former world number 10 told reporters. “I think that’s normal.

“It was going on and off, on and off. I mean, before the match I was actually feeling not bad, but as soon as I stepped on the court, I don’t know how to describe exactly the emotions and what you feel inside yourself. But was not usual.

“I have to get used to it and try to find the ways how to manage these kind of nerves. So I’m happy that I experienced this one. Definitely, I will try to do better next time.”

Kasatkina will take confidence from her run on the Parisian clay.

“It’s best result in a Grand Slam for me,” she said. “I’m very happy with the level and with everything what was going on these two weeks.”

“Winning matches always gives you confidence, and as my coach said, the best medicine is to win matches.”

Kasatkina, who will not be able to play this month’s Wimbledon because of the ban on Russian players following Moscow’s invasion of Ukraine, will rest for a couple of days before starting preparations for the grass season.

“I’m already not in the match, so I’m already thinking about the future and how I have to manage the road to the grass courts, which is good that I’m not in drama mode right now,” she said with a broad smile.

“Sometimes you have to accept what life gives you and go with this. I’m pretty happy with what life’s giving me now.”