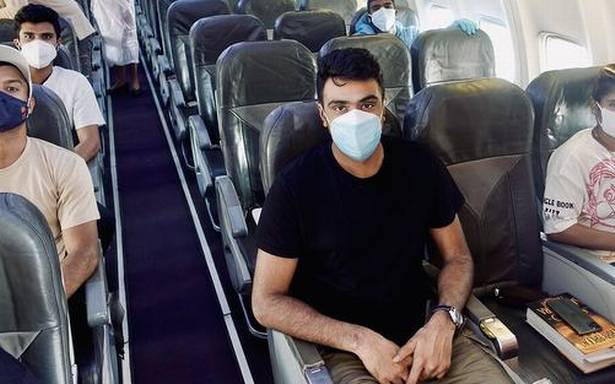 Talking about the ongoing 14-day quarantine in Mumbai, Ashwin gave an idea of the Indian team’s life in the protected environment

Ravichandran Ashwin had "sleepless nights" inside the IPL bio-bubble when most of his family members were suffering from COVID-19 and said he had to leave the tournament midway to help his close ones fight the deadly virus.

Ashwin is now back in another bubble, this time with the Indian team which leaves for a 104-day UK trip on June 2.

"I couldn’t sleep for almost 8-9 days. Since I couldn’t sleep, it was really stressful for me. I was playing matches without getting any sleep. And since I found it really taxing, I had to quit IPL and go home midway.

"In fact, when I left around at that time, I had thoughts on whether I will be able to play cricket thereafter. But still, I did what was required at that point of time," Ashwin said on his YouTube channel.

The IPL was eventually suspended after multiples cases were found in its bio-bubble.

Talking about the ongoing 14-day quarantine in Mumbai, Ashwin gave an idea of the Indian team’s life in the protected environment. "It’s really difficult, guys. It might look from the outside that we are staying at a luxurious five-star hotel. But it is not that easy. Like I said earlier, it is not 7 days, but 14-days quarantine," the star spinner said.

"So, basically, we came here on 19th and we are leaving to England on only June 2 from Mumbai. So, basically, we will finish our 14-day quarantine here in India. And we will have a test here every two days," Ashwin said.

Ashwin also explained that bubble breach doesn’t mean that someone has entered the bubble.

"Many of you would have heard about the term bio-bubble breach. Bio-bubble breach doesn’t mean someone from outside has entered the bubble. This is a virus and we still don’t know how it enters." While most of the Indian players have received their first jabs, Ashwin has got two jabs of Bharat Biotech’s Covaxin.

Ashwin also narrated the experience of reaching the Mumbai bubble from his Chennai residence.

"The way we reached Mumbai in itself was a different experience. With each passing day, the struggle is only getting worse. Hopefully, you will get joy as we play. Seven days quarantine, three tests in seven days and after that, we can practice. It is difficult, but when compared to what people are going through, it’s nothing," he said.

"From Chennai, we took one charter flight. Before taking the charter, we had to take three (RT-PCR) tests. There were three tests on May 14th, 16th and 18th and we (his family) left from Chennai on May 19. From Chennai, next we landed in Hyderabad. Fielding coach R Sridhar, Indian women’s captain Mithali Raj and others also joined us. The flight that took off at 2 pm from Chennai, landed in Mumbai at 6 pm on May 19th."

Ashwin also recollected how the weather impacted their chartered flight.

"The flight was there in the runway for a while and the reason was that was due to the heavy rains on that particular day, the bus that was supposed to pick-up one of the players got stuck.

"And to arrange another bus, the driver should have been in the bubble and they should also sanitize the bus and since these problems were also there. It took one to one and half hours and after that, we got picked in another bus. We came here and checked-in at the hotel."

After seven days of room quarantine, Ashwin is now allowed to hit the gym.

"So, I have my done my first gym session on the 25th. They have made the equipment available in our rooms too. The gymnasium has been made ready for us. Everyone have been allotted different time slots."

With 24 member team going for the UK tour, Ashwin said that there would be an intra-squad practice game before the June 18-22 World Test Championship final against New Zealand in Southampton.

"The WTC final is played at Southampton. The beauty is that there is a hotel at the ground. The teams will stay there. Exact details about the tests are not known, after that we can practice. I think we will play a practice game."

But Ashwin’s biggest worry is biding time in room quarantine once they reach there.

"So, the biggest difficulty for us during quarantine is to how we kill the time here? If we wake up soon, then it will be a really long day for us.

"What we will do in the room? Try to wake up slightly late. It is not easy. I have come with my wife and children. We (me and wife) decided to skip a meal because we hardly exhaust our energy."