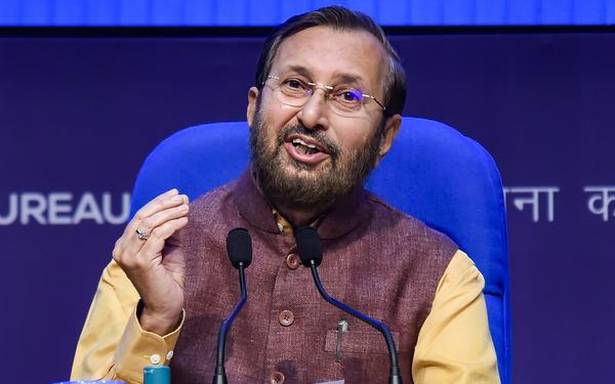 “It has been confirmed, and there is no need for any evidence… ”, he says

Information and Broadcasting Minister Prakash Javadekar on Friday decried the language used by Congress leader Rahul Gandhi to criticise Prime Minister Narendra Modi. He also cited the recent remarks by the Union Health Ministry that 108 crores would be fully vaccinated by December to rebut Mr. Gandhi’s criticism of the alleged slow pace of the inoculation programme.

“The kind of language used by Rahul Gandhi and his attempts to stoke fear have confirmed that the toolkit to do so was prepared by the Congress,” said Mr. Javadekar.

The Congress has registered an FIR against the BJP for alleging that a document by its research department was a toolkit to undermine Mr. Modi. The Congress insists the document was morphed and Twitter had tagged posts by certain BJP leaders tweeting about it as “manipulated media”.

“The [Heath] ministry has given a road map of producing 216 crore doses by December and how 108 crore people will be vaccinated,” Mr. Javadekar went on to deny the charge of Mr. Gandhi that vaccine procurement had been messed up by the government. With over 20 crore doses being administered so far, India was the second in the world and the vaccination was set to see a big jump from August, he asserted.

“Mr. Gandhi’s choice of words like “nautanki” for the Prime Minister at a time when Mr. Modi is working to curb COVID-19 is a part of the toolkit,” he alleged.

“It has been confirmed, and there is no need for any evidence. It is clear that the toolkit was produced by you. The kind of language you used and the way you tried to stoke confusion and fear among people is part of that politics,” he stated.

Mr. Gandhi should rather be concerned about the Congress-ruled States as they have not been able lift their quota from vaccine producers. “When Covaxin was produced indigenously, Congress leaders created doubts about its safety, while Mr. Modi put any such question to rest by opting for this jab,” he added.