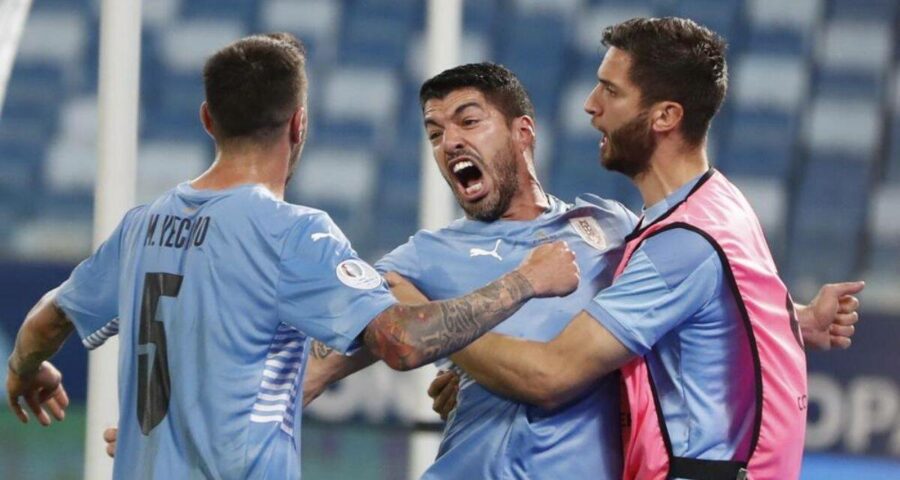 Argentina leads Group A with seven points. Chile is in second spot with five points, followed by Paraguay (3), Uruguay (1) and Bolivia (0). Luis Suárez ended a goal scoring drought for Uruguay that threatened to extend to a fifth straight game.

The veteran striker’s 66th-minute equalizer helped Uruguay to 1-1 draw against Chile at the Copa America on Monday, its first point of the tournament.

The result allowed Chile to advance to the knockout stage of the tournament and kept the Uruguayans in contention in Group A.

Chile’s Eduardo Vargas opened the scoring in the 26th with a powerful crossed shot from the right, and Suárez levelled the score from close range.

Argentina leads Group A with seven points. Chile is in second spot with five points, followed by Paraguay (3), Uruguay (1) and Bolivia (0).

Uruguay tried to be aggressive at the start after four matches without scoring, a stretch including Copa America and World Cup qualifying competition. Chilean goalkeeper Claudio Bravo made two difficult saves in the first 10 minutes, both to shots taken by Giorgian de Arrascaeta.

And then Chile scored. Vargas had a one-two with Ben Brereton on the right flank, entered the penalty box and shot with little angle past goalkeeper Fernando Muslera.

Uruguay once again struggled to give opportunities to Suárez and Edinson Cavani, so coach Óscar Tabárez sent on midfielder Nahitan Nández and striker Facundo Torres after the break.

Torres took a corner that deflected off Matías Vecino’s head so Suárez could reach it. The striker and Chile’s Arturo Vidal stretched to reach the ball, but Suárez hit it first with a volley.

Chile was down to 10 men in the 85th when Erick Pulgar was injured, after coach Martin Lasarte had already made all his substitutions. But Uruguay was unable to capitalize.

After the match, Suárez said he’d been lucky to score at the Arena Pantanal in Cuiaba.

“We are happy with our teamwork today, but we know we have a lot to improve,” he said.

“We were not aggressive all the 90 minutes,” he said. “But we held them well in the end.”

Uruguay will play its third match of the tournament on Thursday against Bolivia. Chile will have its last group-stage game against Paraguay. Papu Gómez scored in the 10th minute as Argentina beat Paraguay 1-0 on Monday and secured its place in the Copa America knockout stage.

The result at the Mané Garrincha stadium in Brasilia put Argentina atop Group A with seven points from three matches. The game also gave Lionel Messi a record 147th cap for the national team, equalling the mark of retired defender Javier Mascherano.

Chile, which also advanced to the quarterfinals, is second in the group with five points after the 1-1 draw with Uruguay. Paraguay has three points, followed by Uruguay (1) and Bolivia (0).

Captain Messi, seeking his first major title with the national team, had to work with a team impacted by six changes in the starting lineup.

The changes did not stop Argentina from starting strongly. Early in the game, Messi found Di María on the right, and the veteran winger eluded the Paraguayan defense with an assist to Gómez. The striker lifted a shot over Paraguay goalkeeper Antony Silva.

Argentina forced Silva to make important saves in the first half but the energy of the team waned in the second half, as it has in several recent matches.

“I was waiting for this opportunity,” Argentina’s Gómez said after the match. “I am thinking of my family, my friends. It comes to your mind that you made a lot of effort (to be there). I had the patience to wait.”

Argentina’s last group-stage match will be on Monday against Bolivia. Paraguay will take on Chile on Thursday. The top four in each five-team group will advance.