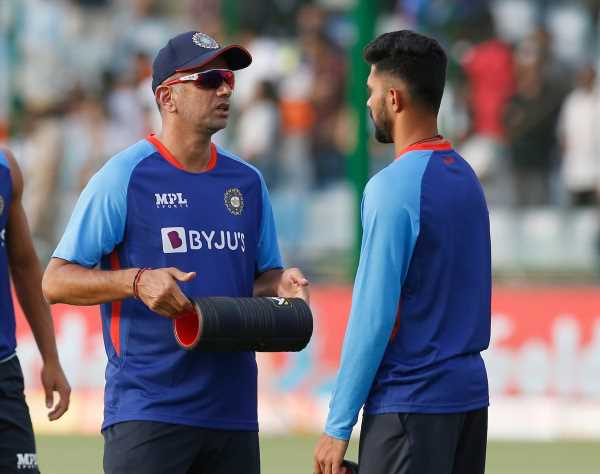 India head coach Rahul Dravid said Rishabh Pant remains an ‘integral part’ of the team’s batting-line up despite struggling for runs in their Twenty20 International series against South Africa.

Leading a second-string India side in place of injured captain KL Rahul, Pant scored 57 runs in the first four matches and was on one when Sunday’s final match in Bengaluru was abandoned due to rain. The series ended 2-2.

“He remains an integral part of our batting line-up,” Dravid told reporters on Sunday. “We know what he does with the power he has … Of course, personally, he would have liked to have scored a few more runs but it’s not that concerning.

“When you’re asking people to play a slightly more attacking brand of cricket in the middle overs and to take the game on a little bit more, sometimes it’s hard to judge based on two or three games.
“For us, he is certainly a very big part of our plans going ahead in the next few months.”

If there were two people who have ideally blown away their chances to be a part of World T20 core squad, they are Ruturaj Gaikwad (96 runs in 5 games) and Shreyas Iyer (94 runs in 5 games). Gaikwad is looking completely out of place in international cricket and Iyer’s struggle against quality pace bowling is now well-documented.

The head coach however chose to be a bit more empathetic towards the duo even though one will not play against Ireland (Iyer is in Test team) and other unlikely to get any more starts.

“We are not going to make knee-jerk reactions on people just like that. I don’t like judging people after one series or one game,” Dravid said.

“Shreyas on a couple of tricky wickets showed a lot of intent, played really positively for us. Ruturaj in one innings showed what he has got. We are not disappointed with anyone,” Dravid once again showed the dogged defence of his playing days.

“As a group, we wanted to play a certain brand of cricket and we were trying to play a slightly more positive and attacking brand of cricket right from beginning and we knew when you try and do that, it is not always going to come off. But we are certainly clear about the kind of cricket we want to play,” he said.

Dravid is known to rely a lot on data analysis and he would love to gather information on playing conditions and oppositions before the tournament-proper.

“Lot of our boys have played in Australia and we certainly will be having conversations with them on what kind of tactics and strategies work,” he said.

“In terms of data and analysis, we will look at all games being played in Australia and obviously they are international games, there is Big Bash and I mean we will do all our research and background things that happens in terms of analysis.

“And of course, we don’t have a series against them (Australia in Australia), so we can’t change that. I guess we have to make do with two weeks we have in the lead up to the World Cup and make best use of it.”

This will be a different England Test side

Rahul Dravid loved playing Test cricket in England and loves coaching a Test team. He reckons that the one-off ‘fifth Test’ against the hosts will be a different proposition from last year when the team under Virat Kohli led 2-1 before Covid-19 cases in India camp forced the cancellation of the final game.

“England are playing well at the moment and it is going to be a bit different from last year when England were probably a little bit on backfoot. They have played some good games and we have a pretty good side as well,” Dravid said, referring to Ben Stokes’ side’s series win against New Zealand.

“Loved playing Test cricket, love watching it and love coaching in Test cricket and so you know, looking forward to it,” he concluded.