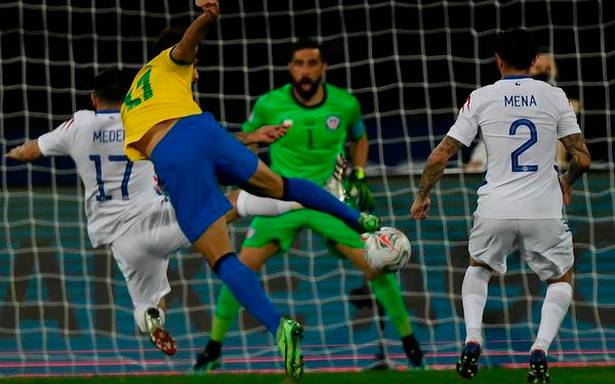 Reining champion Brazil defended strongly with 10 men to advance to the semifinals with a 1-0 win against Chile.

Substitute Lucas Paqueta scored the only goal of the match only seconds before Gabriel Jesus was sent off early in the second half.

Paqueta’s winner to the left corner of Chilean goalkeeper Claudio Bravo in the 46th minute gave Brazil fans some hope that the Selecao would ease into the next stage.

But only two minutes later Jesus was sent off after hitting Chile’s Eugenio Mena with a flying kick.

Brazil worked so hard defensively that Chile had fewer shots on goal after Jesus was sent off than during the time he played; two against three.

Peru too advanced to the semifinals after beating Paraguay on penalties 4-3 after a 3-3 score in regular time, in the most thrilling match yet in this edition.

Regular time at the Olimpico Stadium in Goiania finished 3-3 after a hard-fought match that included red cards to key players of both teams and two goals by Italian-born Gianluca Lapadula for Peru.