Watching him, mindful that he doesn’t let his mask slip, is wife Anju, as she recalls that grim day this February when she had to take the most important decision of her life — and perhaps his, too. 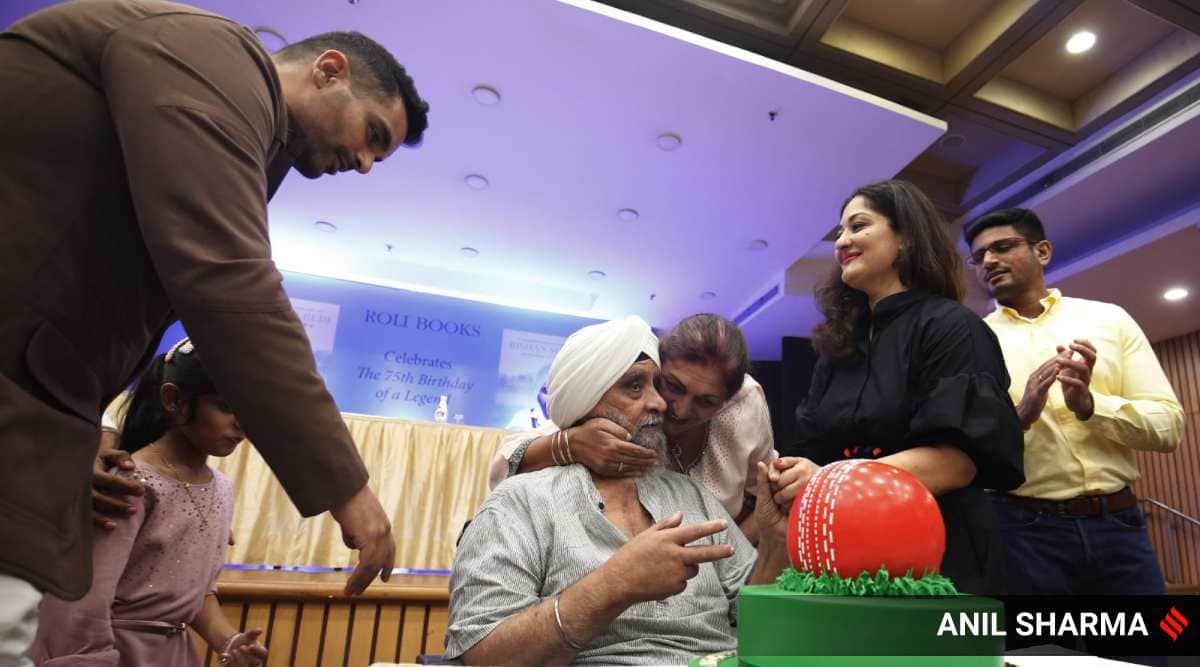 On Friday, a day before his 75th birthday, at the launch of a book on him (The Sardar of Spin), sits Indian cricket legend Bishan Singh Bedi, in a wheelchair, ringed by doting fans and former team-mates.

Watching him, mindful that he doesn’t let his mask slip, is wife Anju, as she recalls that grim day this February when she had to take the most important decision of her life — and perhaps his, too.

Three days after his heart surgery, Bedi had a stroke because of a brain clot. A risky surgery was needed and she was asked for her consent.

“Bishan was lying in the Operation Theatre. Something which he always says sort of enveloped me. He would tell the boys, ‘The game is never over until the last ball is bowled’. That’s when I instantly made the decision and I said, ‘Go ahead with the surgery’. Everybody thought it was the end of the road but I said to myself, ‘Surely your game is not over’,” says Anju with a smile whose warmth touches everyone present.

Seven months after that surgery, Bedi, slightly frail, cuts a cake shaped like a cricket ball, his son Angad and daughter Neha stand on either side; Anju, behind him, leans over to plant a kiss on his cheek. Each one is aware that this picture-perfect frame is a very special gift they have got.

For, nothing was sure when he was discharged from hospital.

Bedi, at times, couldn’t recognise those around him, he had to virtually learn to walk again. To complicate things, he tested positive for Covid-19. Given this, for many on Friday, watching Bedi laugh at old anecdotes or even acknowledge the presence of friends – journalist Gulu Ezekiel read a tribute — was nothing short of a miracle.

Anju underlines that. “Being bed-ridden for almost three months and not being able to speak or say a word and now coming back to life has been a miracle not only for me but for everybody at Ganga Ram Hospital, including the doctors. Bishan fought very bravely, the doctors stood by him.” Says Bedi’s daughter Neha, a lifestyle columnist and vlogger: “He has been through a lot this entire year…We are very fortunate…Basically, we got him back.”

Son Angad, an actor, talks about how the family’s now closer. “These were tough times and tough people survive and he is that man. We as a family supported each other. Now he is in a good space. Prayers have been answered. He has a lot more to offer to Indian cricket, he is not done yet,” Angad says.

The support of Bedi’s cricketing family, spread around the world, was strong, too. Anju says that among regular visitors was Kapil Dev who made his debut under Bedi’s captaincy. Players of Kapil’s generation looked up to their skipper who stood for them and who spoke his mind. Kapil would be in tears watching his captain struggle to coordinate his movements.

“When Kapil visited, he cried like a baby and I felt very bad. Madan Lal, Kirti Azad, Maninder Singh, and Gursharan Singh visited and were my pillars of strength. Also, people love him across the border. From Pakistan players like Intikhab Alam, Mushtaq Mohammad, Zaheer Abbas, Majid Khan and Sarfaraz Khan…all have been on the phone,” Anju says.

Azad, the former all-rounder, who visits his boyhood hero almost every week, says Bedi’s health is on the mend. “He has improved from what I initially saw. I am sure in a couple of months he will be the old Bishan Singh Bedi. He taught us how to be patient and get to a 100 once you score a 50. He will do the same,” Azad said. “Now he recognises me and remembers things, so that is a good sign.”

A fortnight ago, when Azad met Bedi, they played cricket. Bedi sat in a chair on the lawn and bowled while Azad batted a few metres away.

“It was a child-like game. He would sit and bowl and there were stumps and I would bat,” Azad says.