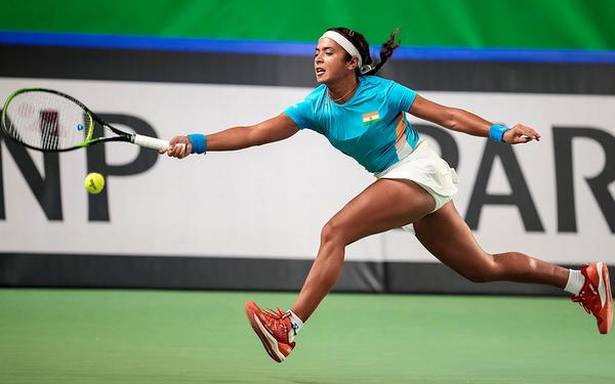 With the Indian leading 5-4 in the third set, the 23-year-old Ostapenko handled the climactic phase like a champion. However, the 28-year-old Ankita couldn’t close it out, opening the door for the Latvian.

Perhaps, a better start could have helped Ankita. Not used to facing an opponent of such quality seemed to be playing on the Indian’s mind as she decided to go on an all-out attack and kept making errors. Though Ostapenko, too, struggled with her serve and strokes, Ankita was unable to capitalise on the opportunities that came her way.

After shrugging off the excitement of the first set, Ankita was a lot more precise and purposeful in the second set. She jumped to a 2-0 lead and stretched it to 5-2.

However, Ostapenko, who found her serving rhythm, fought back. Ankita kept her cool, ran hard during the rallies and placed the ball well to force errors from the Latvian.

At 5-6, Ostapenko’s serve let her down again, taking the contest to the decider. After being treated for a hip strain, she got off to a smooth start in the third set.

While the Latvian No. 2 became more confident and solid, Ankita’s accuracy failed her at a crucial juncture though she continued to put in the hard yards.

Ankita played well above her ranking of 174, pushing a Grand Slam champion to the limit.

In the second singles, Anastasija Sevastova breezed past Karman Kaur Thandi 6-4, 6-0. After giving it her all in the first set, the latter ran out of steam as Sevastova made her scamper around the court.

The reverse singles and doubles will be held on Saturday, and India will hope to come up with something special.