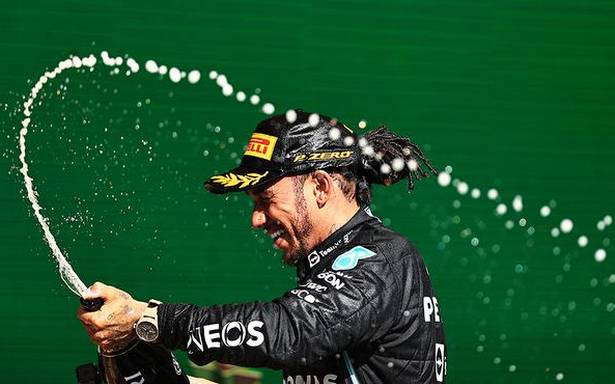 Although statistically F1’s most successful driver ever, Lewis Hamilton has not been able to escape the perception that he has had it easy — he has often driven the best car in the paddock. But against a hard-nosed, generational talent in Max Verstappen this season, the 36-year-old Briton has shown just what he can do in less-than-ideal machinery

Ever since his loss to then teammate Nico Rosberg in 2016, Lewis Hamilton has had a fairly easy path to four consecutive world championships. The last two, in particular, were largely uncontested, with the only man in possession of a car arguably as good as his — Mercedes stable-mate Valtteri Bottas — never really pushing him.

This has allowed Hamilton to rewrite pretty much every record, including racking up a staggering 100 Grand Prix wins — a first in Formula One history — and tying Michael Schumacher’s record of seven drivers’ titles.

On Sunday, Hamilton earned his 101st win in Interlagos in a nail-biter, pipping title-rival Max Verstappen in a weekend during which a series of penalties repeatedly put him on the back foot.

First, the 36-year-old Briton was excluded from qualifying for the sprint race and had to start from the back in the 30-minute dash. He breezed past the field to finish fifth. A five-place grid penalty for the main race because of an engine change meant he had to line up 10th.

Like the motto he has tattooed on his back — ‘Still I Rise’ — the reigning champion produced what he called the “best weekend” of his career, cutting his deficit in the drivers’ standings to 14 points.

But trailing at this point of the season is not a position that he has often found himself in since the Mercedes juggernaut started rolling in 2014. Hamilton has never really had to sweat a lot for his race wins and titles ever since the hybrid era of F1 began eight seasons ago.

For three years, his title rival was former teammate Rosberg — a period during which he won twice and lost once. Although Sebastian Vettel and Ferrari appeared as if they could mount a challenge in 2017 and 2018, they frittered away their chances as those seasons unfolded.

However, in 2021, Hamilton has had to dig deep like never before in his fight with Verstappen. The 24-year-old Dutchman is widely seen as a generational talent and, ever since his debut, has been tipped to challenge Hamilton’s dominance.

But it has taken six seasons for the two to be locked in a year-long title fight after Red Bull finally put together a package that could compete from the start of the season.

Also, this year, Mercedes was one of the teams hurt by a small tweak to the regulations concerning the floor of the car near the rear wheels, which affected it in the first half. Red Bull’s car is designed on a different concept and thus was not hit by this, which has allowed it to be slightly faster on average, although Mercedes has had tracks, like Interlagos, at which it has been dominant.

The fact that the title race is still alive is thanks to a bit of misfortune for Verstappen, but also equally to Hamilton’s heroics in a slightly slower car, especially at the start of the year when he won three of the first four races.

The Briton has not been flawless this season, with mistakes creeping in, but he has also produced moments of magic that very few can, to collect opportunistic wins. He has had to try different ploys, sometimes saving tyres and using them strategically in defence, at times driving within himself to unleash pace when in clear air or even get the elbows out to make a point.

His win in Bahrain’s season-opener was down to Mercedes’ strategic master-stroke, which allowed him to jump Verstappen, but he had to manage his tyres in the final stint when the Dutchman was attacking him on much fresher rubber. His car positioning forced Verstappen wide when making the pass, which effectively decided the race.

In Portugal, Hamilton lost out at the safety-car restart but smartly hung back and nursed his tyres while Verstappen was chasing Bottas. And when Verstappen erred slightly, Hamilton capitalised, making his move to slip into second and subsequently win. In Spain, Hamilton again lost out at the start, but did a two-stopper to hunt his rival down from far behind on fresher tyres.

While he is statistically the most successful driver ever, criticism of Hamilton has been that he has always had the machinery to succeed. He holds the record of winning at least one race every year since his debut.

However, this season he has shown, with wins in races like Portugal and Spain, why he is paid the big bucks. A simple comparison with teammate Bottas, a driver quick enough to lap close to Hamilton in qualifying, will show his effectiveness. The Finn often finished half a minute behind in the races Hamilton won despite sometimes starting ahead.

More importantly, after being unchallenged for the last few years, the Briton has had to deal with a hard-nosed competitor in Verstappen. The Dutchman seldom gives an inch in close combat. In the past few years, when not much was at stake in battling the youngster, Hamilton often bailed out of wheel-to-wheel skirmishes, keeping the big picture in mind and avoiding big crashes.

But this year, the experienced campaigner has had to readdress this aspect of his driving. He was mugged by Verstappen at the start on a few occasions early in the season, especially before he decided he needed to make a strong statement by not yielding.

Things came to a head in Silverstone when Verstappen took the lead in the sprint race in a hard opening-lap battle. Hamilton knew he had to do something in the main race, considering he was 33 points behind, and went for an opportunistic move that saw the two come together.

While Verstappen crashed out, Hamilton won, gaining him 25 points. But importantly it showed he had had enough of the cautious approach and was ready to take a risk to lay down a line in the sand. Inevitably, the two clashed again in Monza during the Italian GP and took each other out.

In Interlagos, the two were again in a tight wheel-to-wheel battle, and, on lap 48, Hamilton tried to overtake Verstappen when the latter gently pushed him wide. However, Hamilton was wise to the situation and yielded, knowing he had the car to come back again. Within a few laps, he made the decisive move on route to a popular victory.

It was one of his most important wins in recent times — it came after three races of losing ground to Verstappen, ensuring his hunt for an eighth title stayed alive, with just three rounds to go.

While Hamilton’s spot in the upper echelons of the sport is secure, a hard-fought title triumph in machinery that has not been the benchmark this year against a world-beating rival could bulletproof his legacy. At the very least, it will deplete his critics’ most potent ammunition.