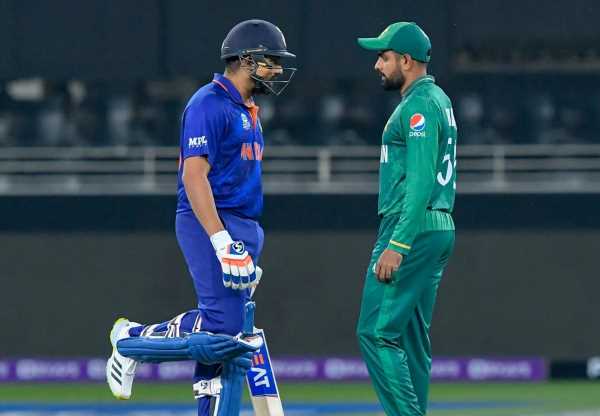 Left-arm spinner Nawaz had dismissed Rohit Sharma and Virat Kohli in successive overs to bring Pakistan back into the game.

Babar then took Nawaz off, bringing back the tweaker to bowl the final over of the match.

Speaking to the Star Sports television channel after the match, as quoted by Hindustan Times newspaper, Akram said, ‘Babar made one mistake. He should have had Nawaz bowl the 13th or 14th over… You can’t have a spinner in T20s bowling in the last 3 to 4 overs, especially against the likes of Ravindra Jadeja and Hardik Pandya.’

‘I was impressed by Pakistan’s bowlers,’ Akram added. ‘(Shahnawaz) Dahani, playing his 3rd or 4th game, Naseem Shah, 20-21 years old playing his first game, Haris Rauf has been consistent for Pakistan… Every bowler tried their heart out.’

‘You can see that the future is bright for Pakistan as far as fast bowling is concerned,’ Akram, who took 414 Test wickets and 502 ODI wickets in his career and is widely reckoned to be the finest left-arm fast bowler of his time, stated.

Before the game began, Akram was rhapsodic about Dahani being picked in the playing eleven, then getting annoyed when Star Sports mistakenly did not include the fast bowler when it projected its Pakistan team on screen.

Akram protested to sportcaster Mayanti Langar Binny about the omission and want the production crew member who apparently goofed to be pulled up!