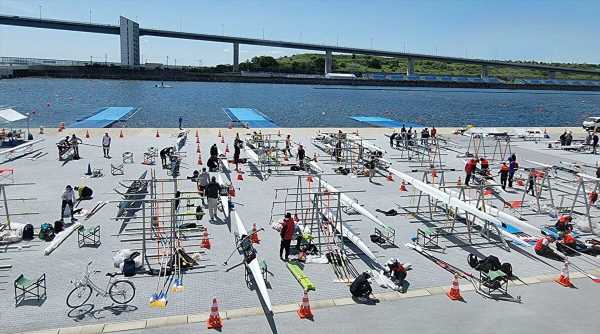 The Indian rowing team, in Tokyo for the Olympic qualifying tournament that began on Wednesday, is getting a glimpse of what the Games could look like in July-August. Staring out of the window of his room on the ninth floor of a hotel alongside Tokyo Bay, Ismail Baig describes the scene on a Tuesday evening. “The streets are eerily empty, absolutely no one. One or two cars pass by during the day. There is a tall building in the background, but no one is going in or coming out. It’s very quiet outside,” Baig, India’s rowing coach, says.

In less than 80 days, roughly 10,000 athletes from more than 200 countries are expected to descend upon the Japanese capital to compete in the Olympic Games. But the usual hype and energy that grip the host city have been replaced by rules, restrictions, more rules and more restrictions.

The Indian rowing team, in Tokyo for the Olympic qualifying tournament that began on Wednesday, is getting a glimpse of what the Games could look like in July-August.

Last Wednesday, the organisers of the Tokyo Olympics released a playbook that detailed the protocols each participant will have to follow before, during and after the Games. Those guidelines are being trialled this week during the rowing qualifiers.

Teams have been instructed when to enter (May 1) and leave (May 8) Tokyo. They have been told when to eat and where to talk. Except for meals and travelling to the competition, at no point can they step out of their rooms. Sightseeing and shopping are out of the question. “There isn’t a lot of freedom. If we violate any rule, we will be disqualified,” Baig says.

It is frustrating, he admits. But he also understands the justification. “Events all over the world are getting cancelled. Even in these tough times, they are organising a tournament with people from so many countries. It is our duty to help them by following the rules.” On Saturday, when a bunch of athletes gathered too close to each other near the 3m springboard during the Diving World Cup at the Tokyo Aquatics Centre, the announcer ‘scolded’ them for violating social distancing norms, according to Reuters. Aquatics and rowing events, comprising international athletes, are currently being held in Tokyo, putting the spotlight on the Covid-19 countermeasures proposed for the Games.

A lot of rules – like Covid-19 tests before departure and after arrival, daily testing during competition, wearing masks and using sanitisers – are similar to what have become standard practices at most tournaments across the world. In addition to those measures, each member of the travelling contingent for the rowing qualifiers had to download the Japanese government’s track-and-trace mobile app.

“They had given us specific forms in relation to our Covid tests. So we had to submit those, along with some declarations, and provide them the details of our stay. The officers at the airport ensured each person had downloaded the app and had enabled the location services,” Baig says. “It took almost five hours for the entire team to finish the process – from testing to submitting all documents and installing the app – and leave the airport after we landed.”

At the hotel, the rules are stricter. Each country has been allotted an entire floor to prevent rowers from mixing with each other, and every person has been given an individual room. Team members have been refrained from going into each other’s rooms and even speaking with one another.

“The only time we can step out of our room is to eat. We have been given fixed timings for each meal. There is individual sitting for everyone. The only time we can remove the mask inside the hotel is while eating. But we are not allowed to talk,” Baig says.

So, the 20-minute bus drive from the hotel to the competition venue is the only time Baig gets to pass on instructions to his rowers. “I have to keep everything crisp and to-the-point. We do not have any time for small talk. The moment we enter the bus, I start giving instructions to the rowers so by the time we reach the venue, we are prepared,” he says.

For Baig, the challenge has been to keep the nine-member team focused on the task at hand despite the strict protocols in Tokyo, and the distractions before reaching there. The team’s participation in the tournament was doubtful until last week because of the travel restrictions following the surge in cases in India.

The ongoing lockdown in Delhi added to the uncertainty as the Rowing Federation of India found it tough to deliver visa documents to the embassy. “We somehow managed to submit them in time and the visas were issued to us,” RFI secretary-general MV Sriram said.

But that was just the beginning of the logistical challenges. The pre-departure Covid-19 forms had to be in a specified format, different from the ones in India. Securing seats on a flight to Tokyo was even tougher, given the restrictions, and once that was managed, they were unable to carry their own oars because of airline rules.

With rented oars and after a tumultuous build-up, the rowers hope to secure spots in the Games, in the penultimate Olympic qualifying event. Rowers who finish in the top five in single scull and in the top three in double scull will make it to the Games.

No Indian rower has made the cut so far but Baig is hopeful of breaking the duck this week. “I feel confident about our chances. It’ll be nice if we can seal our qualifications here so we can return in July and hope that Tokyo will be a lot more buzzing than it is at the moment.”