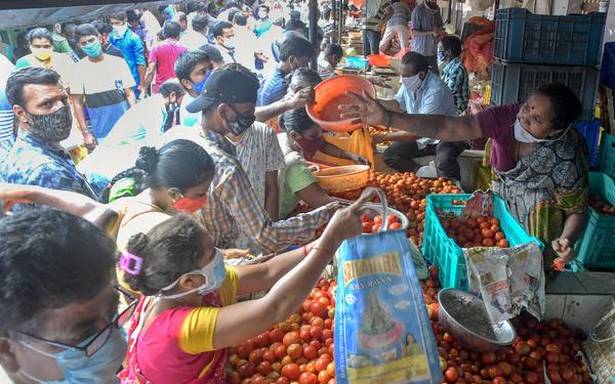 There was a mad rush for vegetables and to the chicken and mutton shops after the State government announced imposition of partial curfew effective from 12 noon on Wednesday.

Huge crowds thronged the Rythu Bazaar at Seethammadhara right from the early hours of Wednesday. The consumers jostled with one another as there was hardly any space to move in the rush at the spacious bazaar. Some of the customers were seen sneezing and coughing, though they had their masks on. The consumers were least bothered about social distancing as their only concern seemed to grab the vegetables as though they would run out of stock.

“There is no need to go for panic buying as the Rythu Bazaars and shops will remain open from 6 a.m. to noon every day. The idea is to enable people to make their purchases in a relaxed manner while observing COVID-19 protocols like social distance, wearing masks and using sanitizers to check the spread of the virus. Failing to observe the protocols, would not only make them susceptible to the virus but they may also spread it to others,” opines an official expressing disgust at the behaviour of the crowds.

The police personnel were seen asking the public on the streets to return home quickly as curfew was in force from 12 noon. The crowds took time to move on but the police also took a lenient view as it was the first day of the curfew. Though shops on the main road were closed, some of the bakeries in the internal roads functioned beyond noon.

Fruit sellers at Poorna Market sold mangoes at reduced prices of ₹200 for two dozens to exhaust their stock before the curfew was clamped. Autorickshaws were overcrowded with commuters in the absence of RTC buses from noon.

But beyond 1 p.m. the roads bore a deserted look, as curfew was in force.