Sharma had received the national-level best counsellor award and also the state's best teacher award in 2009. 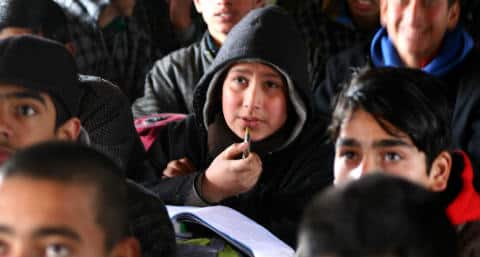 Kanchan Sharma, a retired government teacher, occasionally visits slum dwellers at Maratha Basti here to conduct a two-hour open class with the motive to keep the underprivileged children engaged and empower them through education.

The 61-year-old is actively working with the community since 2009. Hailing from Pipri village of Maharashtra’s Nagpur, she has been motivating elders for several years to get the children enrolled in her makeshift primary school ‘Sangarh Vidya Kendra’ at the slum.

“I saw my efforts going haywire after noticing some of the children missing the online classes and begging at a city square amid the coronavirus-induced lockdown last month,” Sharma, known as ‘super teacher’, told PTI. Over three dozen neatly dressed students have turned up to attend their offline class at an open area inside the slum amid strict adherence to the Covid protocol. Schools in the Jammu zone are presently closed on account of the summer holidays.

Sharma retired as a lecturer from School Education Department after a long service of over 39 years in March last year and is using her own resources to run the slum school after getting permission from the department. “It all started in 2004 during my posting as a teacher at government girl’s high school Gandhi Nagar. Three students from the slum came to get enrolled and I asked them whether there are any other students who want to join the school and their response in affirmative motivated me to visit them,” she said.

The teacher said she was surprised to notice minor children sitting idle in groups, playing cards and even chewing tobacco. “I told myself that I need to work with them so that the children get empowered through education. The effort saw 40 children getting enrolled in Gandhi Nagar high school.”

A resident of the Trikuta Nagar area of the city, Sharma said despite transfer from the school she continued her connection with the slum dwellers after hearing that all the 40 children have left the school. “Subsequently, I got permission from the department to open a private school that will provide free of cost education at the slum,” she said, adding her students at the slum are sharp and intelligent and just need a proper atmosphere to grow as good citizens.

She said over 100 children got enrolled at her school which was finally opened at a makeshift tin-roofed shed, provided by the slum dwellers, in August 2009 and many of them are presently reading in high and higher secondary schools.

“After the coronavirus-driven lockdown forced closure of schools in April, I visited the slum and arranged a few smartphones to run online classes for the enrolled students whose number presently stood at 120. Their parents are poor and hardly afford to provide smartphones to children. The initial days of enthusiasm disappeared and there was a visible change in the behaviour of the children. I was surprised to notice some of them begging at Gandhi Nagar market which hurt my soul and I visited their parents to motivate them not to ruin the future of their children for some bucks,” she said.

The teacher said she would have easily provided them ration or other necessities of life but instead opened a school for them. She said the best way to eradicate poverty is through education. “I decided to organise a two-hour open class once a week to keep them engaged so that they remain focused and do not lose track.” Sharma had received the national-level best counsellor award and also the state’s best teacher award in 2009.

“My family always supported and cooperated all through my career whether I decided to build a culvert over a stream to facilitate smooth movement of minor students and a blind teacher near a school in Sunderbani area of Rajouri or running a school in the slum,” she said.

She said no NGO or any society helped her in the endeavour and she is providing a monthly salary to four teachers engaged by her in the school from her own pocket. The people in the slum are happy with her efforts.

“The teacher is working very hard to get our children educated. We are poor and are facing a lot of financial issues, especially after the outbreak of Covid,” said Rani.