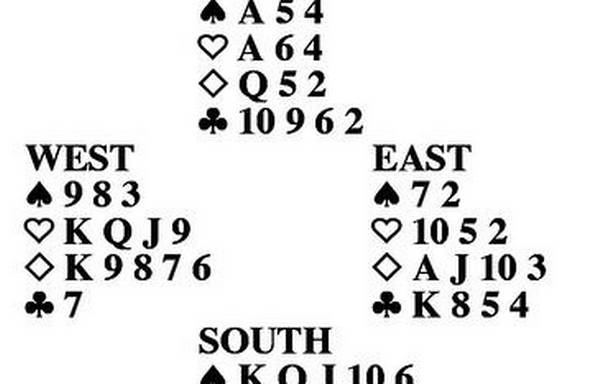 The club’s Saturday night duplicate was just starting when Hard Luck Louie declared this deal. He won the opening heart lead with dummy’s ace and led a spade to his king. He continued with the queen of spades and a spade to the ace, drawing trumps. He ran the 10 of clubs for a successful finesse, and then led a club to his queen to repeat the finesse.

Bad luck for him when West showed out on the second club. There was no entry to dummy to repeat the club finesse and the contract drifted one down. “Do you believe my luck?” said Louie. “Even when my key finesse is onside for once, I still go down.”

When Lucky Larry played this deal, he also won the opening heart lead with dummy’s ace. He saw that his contract depended on a successful club finesse, but there was no reason to also rely on a 3-2 club split. He led a low club to his queen at trick two. When that won, he cashed the king and queen of spades and led a spade to the ace. He ran the 10 of clubs, just like Louie did, but this time when West discarded, Larry was still in dummy to repeat the finesse. Making four!