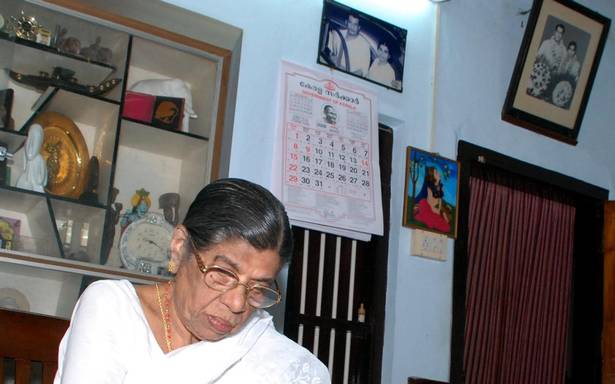 Noted for her revolutionary activism among the poor, working class, and peasants, she was jailed on a number of occasions for political activities.

“I am just like any other common woman. I don’t have the diplomatic flexibility of seasoned politicians. I am very straightforward in talking my mind and working it out the same way, with no holds barred. My rough nature has created a lot of friends and foes for me. There are a lot of people who hate me and love me due to my nature,” wrote K.R. Gouri Amma in her autobiography Atmakatha.

She epitomised the presence of women in Kerala politics for several decades.

Born on July 14, 1919, as the seventh daughter of K.A. Raman and Parvathi Amma at Pattanakad in the Alappuzha district, Ms. Gouri entered politics as a student activist and joined the Communist Party of India (CPI) in the middle of the 1940s at a time when not many women dared to enter politics. It was a time when Communists were facing the wrath of British and caste discrimination was rampant. She made her presence felt by calling on the then princely state of Travancore to join the Indian Union. Noted for her revolutionary activism among the poor, working class, and peasants, she was jailed on a number of occasions for political activities and suffered at the hands of police especially in her early political career.

Ms. Gouri fought the first elections in Travancore in 1948, before the formation of the State, without success. She, however, tasted victory in the elections held to Travancore-Cochin Legislative Assembly in 1952 and 1954. The first woman advocate from the backward Ezhava community, Ms. Gouri got elected to the Kerala Legislative Assembly from Cherthala constituency in 1957 on the CPI ticket following the formation of the State. From a diminutive grass-root worker of the Communist Party, she became the first and only woman Minister in the Communist government led by E.M.S. Namboothiripad. That was the beginning of a long and vibrant journey in Kerala politics, which had seen her donning the role of people’s representative, Minister in various governments, farmers’ leader, trade unionist, and women’s leader.

Apart from the Land Reforms Bill, another major contribution to modern Kerala was that she helped draft and present the Women’s Commission Bill and Anti-Corruption Bill in 1987.

Despite her political stardom, Ms. Gouri’s private life was subject to public scrutiny. After the split in the CPI in 1964, she joined the newly formed Communist Party of India (Marxist) [CPI-M]. Her husband T.V. Thomas, also a Minister in the first Communist government, stayed with the CPI. They had issues in their private life and the couple separated on ideological grounds.

By the late 1980s, Ms. Gouri’s image as a fearless Communist and an adored administrator reached its pinnacle. Although she was widely touted as the party’s choice for Chief Ministership in 1987, the top post went to E.K. Nayanar after the Left Democratic Front’s (LDF) victory in the polls. Apart from CPI (M) sidelining her for the Chief Minister’s post, she never made it to the central leadership of the party, despite her ability and stature as a tall leader. Her unyielding attitude did not make things easier. According to political observers, being a woman and belonging to a backward community might have played a part in her getting sidelined in the party.

Her relationship with the CPI (M) soured and she was expelled from the party in 1994. The former Communist firebrand formed the Janadhipatya Samrakshana Samithi (JSS) and joined the United Democratic Front. She went on to become a Minister in the UDF government in 2001. However, in the final years, she left the UDF and sided with the LDF. With the demise of the revolutionary leader, the curtains have come down on a chapter in Kerala politics as she was the last in the generation of political leaders who shaped the cornerstones of the present State, being part of the first elected Cabinet.