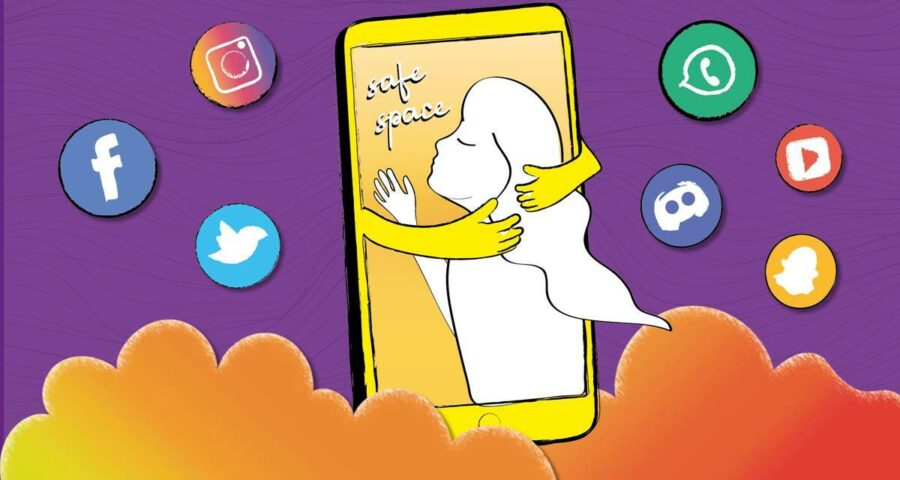 Who knew that on the other side of 'doomscrolling' is a virtual safe space filled with support and belongingness? In the pandemic, social media outgrew its role as an extension of people’s lives to being a primary mode of communication. Platforms like Twitter and Instagram were able to amplify requests for resources — be it medicines, beds, or oxygen cylinders — making us wonder how only a few months ago, they were filled with dalgona coffee recipes, fitness videos, and reel challenges. This evolving nature of social media has been extremely intriguing.

The results of a survey conducted by the International Institute for Population Sciences (IIPS), Mumbai, reveal a spike in the usage of social networking applications in the first phase of the nationwide lockdown. This spike can be attributed to the uncertainty that settled with the onset of the pandemic. In the absence of physical proximity, online spaces helped users to connect with one another.

“Social media has helped me more than I’d like to admit. It has been one of my biggest getaways during the pandemic — be it Twitter, Instagram or WhatsApp. I’m grateful for how I have been able to keep in touch with my friends since the beginning of the pandemic. I also met a few people on Twitter who have become quite close to me over time,” Anwesha, a 20-year-old college student from Assam, shared with indianexpress.com.

In terms of demographics, Gen Z — dubbed as the ‘social media generation’ — dominates platforms such as Instagram, Twitter, TikTok and Snapchat. This is the same generation that is spending currently their pre-teens and early adulthood in isolation. Research done by ‘The Brave Face of Gen Z‘ finds young people have been deeply impacted by the crisis. More than 70 per cent say they are currently going through higher levels of stress because of Covid-19 and 57 per cent say their mental well-being has been affected. In this situation, their primary mode of media consumption and communication has been social media.

A study published in Cyberpsychology, Behavior, and Social Networking in April 2021, found that for adolescents, using social media to actively face the situation, relieved their feelings of distress and anxiety to some degree, increasing feelings of happiness.

But is this side of social media reserved only for Gen Z? Not at all.

Priyanka Bhatia, a 30-year-old from Mumbai, said: “Living alone for me meant that lines between work and personal life blurred and I spiralled into severe depression. That’s when I re-discovered BTS (K-pop group) on YouTube. When I say their music saved me, I mean it. After making a Twitter account to follow their activities, I started interacting with the fandom and it genuinely felt like finding a safe space, which helped my mental health.”

Delhi-based counselling psychologist Radhika Dhawan told this outlet that social media has come to be recognised as a healthy coping mechanism, “not only in the form of a distraction but also in the form of being connected to one another”.

“It has helped people in mobilising resources. In fact, a number of my clients have spoken about finding a sense of belongingness on social media that makes them feel safe and connected,” she said.

There has also been a growth of non-traditional platforms like Discord, Reddit and Clubhouse, which has helped people cope with loneliness.

Amrita, an undergraduate student from Bengaluru, told us how she found one such community. “I saw a posting on Reddit where they were looking for like-minded people from Bengaluru, for a platonic group between 21 and 27. I immediately signed up and was added to a Discord server. There, I met some amazing people and built a friendship by playing online games, listening to music and having discussions. Now, whenever I’m stressed or frustrated with college, I share with them.”

While a blessing then, when it comes to social media, there is a need to draw a line between coping mechanisms and dependence. Omar Bazza, a Canada-based therapist and host of the YouTube channel PsycDelivered, told this outlet: “Social media has become an important tool to stay connected. There, however, are also some consequences to that — mainly the presence of misinformation and the fact that social media can also be associated with higher levels of anxiety and depression.”

Dhawan said that for starters, it should stay as one part of your routine and not become your entire routine. “The minute the latter happens, it does not take time for personal comparisons with others to make their way into your life, impacting your confidence and self-esteem. Instead, it should be seen and used as a getaway for some downtime for 1.5 hours max.”

(The writer is an intern with Indian Express)