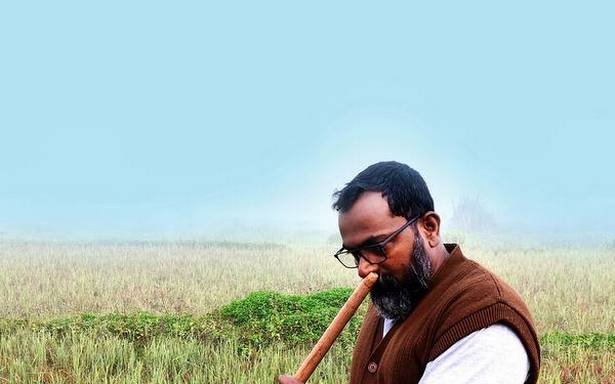 Meet the bamboo artist from Kerala who has mastered the art of playing a tongali, a nose flute instrument used by tribes in the Philippines

Bamboo artist Rajiv VK first heard the tongali, a nose flute instrument from the Philippines, in February 2019, when he was attending a workshop Feeling Through Bamboo Music, organised by National Institute of Design (NID) in Bengaluru. Rajiv was introduced to the woodwind instrument through Edgar Balansi Banasan, a bamboo artist from the Philippines, who was one among the participants at the workshop.

Although tongali resembles a normal flute, it is four-holed as opposed to regular flutes that have eight or more. Yet, the sound it produces is both mellow and soothing, “Listening to it is very calming, making it ideal for meditation,” says Rajiv, adding that he was fascinated by the instrument, though it was its history that caught his attention.

“Banasan belongs to the Kalinga tribe of the Philippines…they are among the tribes that play the tongali. I wondered if the people had anything to do with Kalinga, the battle that changed emperor Ashoka’s view toward war and violence. He [Banasan] says they could be descendants of the tribes that may have migrated from India towards East Asian countries,” says Rajiv.

While the Kalinga call it tongali, other Filipino tribes call it by names such as pitung ilong and kalaleng. Versions of the nose flute are played in countries such as Taiwan, New Zealand, Congo and Hawaii, although the material varies: wood, bamboo, and even whales’ teeth.

Assisting Banasan and listening to his stories about how the flute was used, Rajiv wanted to recreate the instrument and expand its reach. Returning home to Thattekani in Idukki, he crafted his own tongali, based on the one that Banasan had gifted him. “Among its other ritualistic uses, the tongali was used to ‘awaken’ paddy fields; its soothing music helped rice grow. That is such a beautiful idea…of man and Nature being one,” he says.

Rajiv went about not only perfecting his tongali, but also learning to play it. “In fact I had participated in an event in Bengaluru early last year, before lockdown, where the participants took to it. The music is more haunting, than being musical in the conventional sense. It is not a song, it is more a tune,” he says, describing its sound.

“You have to be calm when you play it. With a regular flute you can play it irrespective of your state of mind. However, with tongali or any nose flute for that matter, you have to be in a peaceful space,” says Rajiv, adding that he spent the whole of last year fine-tuning his skills.