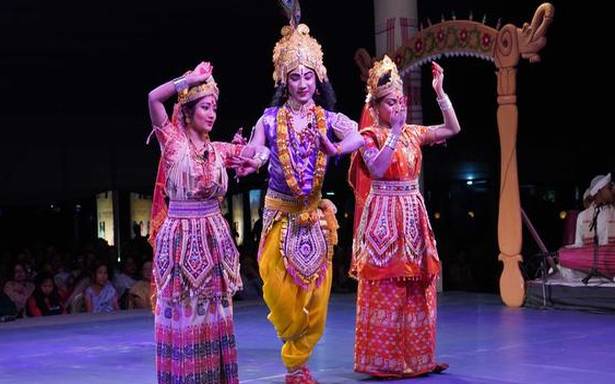 “Go to Guwahati for the Ankia Bhaona Samaroh. You will have a rare experience and a new vision of Assamese culture,” Raju Das, an officer of the Sangeet Natak Akademi, New Delhi, who hails from Assam, had told me.

I arrived in Guwahati as an “outsider-observer” of Assam’s 500-year-old unique Ankia Bhaona theatre tradition, my knowledge limited to a few articles I had read about it. ‘Rukmini Nagar Bihu Field, Rangamancha Path, Guwahati’ — the address of the festival venue aroused instant excitement — Rukmini is a popular character in this art form and the road leading to the venue was named rangamancha or stage!

The spiritual and artistic ambience of a Namghar (prayer hall of a sattra or monastery where the ritualistic performances happen), constructed under an oval-shaped roof, was recreated at the Bihu Field in the heart of the city. A large number of spectators — men, women and children — had occupied the seats around the stage even before the play had begun. And before taking their seats, they offered prayers to the Manikut (the sanctum of the Sattra ) put up at the upper end of the stage. The surging crowd proved the incredible popularity of this ritualistic theatre tradition.

Ankia Bhaona, thriving in Assam for five centuries, is known as the precursor to Sattriya, Assam’s classical dance tradition, and was created by Srimanta Sankaradeva, the renaissance man of Assam. Born in 1449, he was a saint, social reformer, scholar, poet and playwright.

While Sattriya is known across the globe, Ankia Bhaona is hardly staged or known outside Assam. However, its mass appeal is apparent during festivals, with top political leaders from around the country and the State, including the Chief Minister, attending the performances.

Sankaradeva scripted six plays — Ram Vijaya, Patni Prashada, Parijaat Haran, Rukmini Haran, Keli Gopala and Kaliya Daman — all revolving round the stories of Krishna or Rama from Bhagavata Purana, The Mahabharat and The Ramayana. These six plays have been staged repeatedly over the past 500 years and continue to captivate audiences despite the change in time, taste and trends, such is the impact of the theatrical spectacle that Sankaradeva devised.

Ankia Bhaona’s uniqueness lies in its inherent synthesis of the classical and the folk theatre traditions. Composite in character, it has been a beautiful confluence of dance, drama, music, literature, religion and even the art of mask-making.

A versatile Sanskrit scholar, who was well-versed in Natyashastra, Sankaradeva undertook a 12-year pilgrimage across the country to familiarise himself with the rich folk traditions of different regions. With this understanding, he conceived Ankia Bhaona, which later played a pivotal role in the development of the theatre traditions of the Northeast.

Following the format of Indian classical theatre, Ankia Bhaona starts with a Purvaranga (prelude) and has a Sutradhar (narrator-anchor) as well. Unlike other theatre forms, where the Sutradhar appears intermittently to anchor proceedings, here he is anchor, director, narrator, singer, dancer and actor and remains on stage throughout.

Wearing a white long-sleeved coat, white turban and elaborate ornaments, he enters the stage with a pure dance sequence known as Sutradhari Nach, recites the introductory verses (Bhatima), explains the plot of the play, and announces the entry and exit of the characters. He even narrates situations in the plot that can’t be staged. All his interpretations are replete with elaborate hand gestures and body movements. It is he who constantly reminds the audience about the relevance of total surrender to the divine, Hari, even as he anchors the play that is meticulously crafted to entertain and educate the masses about Vaishnavite philosophy.

From the play ‘Ram Vijaya’

Though drama in form, Ankia Bhaona is a treasure trove of dance and music. The Purvaranga establishes the mood followed by a rhythmic group performance by dancing musicians called Gayan-Bayan (singers with large cymbals and percussionists with the khol). As with Sattriya dance, Gayan-Bayan has emerged as a popular independent performance style in recent times.

“Since it includes music and dance, Ankia Bhaona uses a variety of raags and taals that none of the other folk theatre traditions explore,” says Ratan Hazarika, director, Sattriya Kendra, Guwahati. It is mandatory for each character to enter and exit the stage with a definite dancing pattern. According to Sattriya dancer Anita Sarma, who is a Sangeet Natak Akademi awardee, “Ankia Bhaona has contributed immensely to Sattriya dance in terms of abhinaya, footwork and hand gestures.”

“Sankaradeva broke away to a considerable extent from the confines of classical Sanskrit drama and based the theatre form more on folk dance and drama to make it accessible to all,” says Pona Mahanta, former professor, Dibrugarh University, who was invited to the festival as an observer.

With nearly 900 Sattras spread across Assam that follow the philosophy of Sankaradeva and his principal disciple Madhavadeva, the land of the Brahmaputra hosts innumerable performances of Ankia Bhaona, which seem to define the culture of the region. The sattras apart, modern theatre groups also take great pride in performing the Bhaonas independently. An increasing number of Bhaona festivals and competitions are being held with the support of the State government and cultural institutions.

Assam’s cultural canvas is clearly not limited to only Bihu and Sattryia, but extends far beyond.