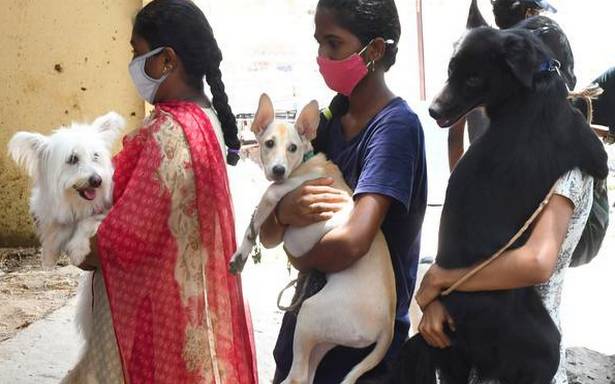 Pet owners line up to vaccinate their cats and dogs

Owning a pet dog or a cat is no more a status symbol and hence is no yardstick to one’s economic well-being. And, it was evident at World Zoonoses Day celebrations organised on Tuesday.

The hospital premises was filled with dog lovers and their pets by 9 a.m. The environs were reverberating with barks and growls, while the dog owners exchanged their experiences with fellow dog lovers.

While the Pomeranian breed dogs were seen in large numbers, Border Collie, Bull Mastiff, Dacshhund, Indian Spitz, Labrador and, of course, Chinese Pugs were some of the other breeds that were brought for vaccination.

Of all the dogs that were lined up for vaccination, Great Dane or German Mastiff, is stated to be the tallest dog. Shih Tzu, Chihuahua are some of the new Chinese breeds that were seen at the hospital. As everyone was looking at these tiny dogs, a pride owner said that there were very few Chihuahua breed in the city. The cost of the dog was a little bit higher compared to other breeds. But, Chihuahuas were very friendly, he said.

The government supplied about 5,000 doses of vaccine, Mr. Tagore said.

The vaccination programme would continue throughout the year. In view of the pandemic, the celebrations were a low key affair. Initially, it was planned to organise awareness camps and programmes, but for the pandemic. The pet owners could bring their pets through the year, he says.

Explaining the importance of Zoonoses Day, he said it was celebrated on July 6 every year to bring the problem into people’s consciousness, and remind them to take action. It was observed to commemorate the administration of the first anti-rabies vaccination by Louis Pasteur in 1885.

Zoonoses are diseases and infections, which are naturally transmitted between vertebrate animals and man. Rabies was most deadliest disease that transmitted from animals to man, he said, adding that vaccination of dogs was must to prevent rabies.