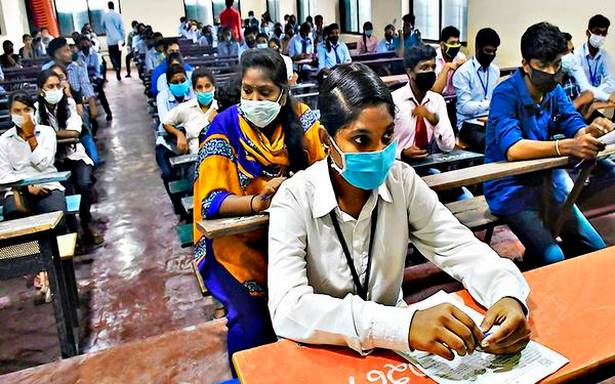 The State government’s decision to promote fresh candidates currently enrolled in second year pre-university (II PU) without conducting exam, not only offers 5% grace marks in addition to their actual score in I PU examination but also gives other additional advantages which will further inflate their scores.

According to an order issued on July 5, all fresh candidates will be scored based on their SSLC and I PU marks that will be given 45% weightage each, and II PU internal assessments (10%). They will be awarded 5% grace marks in each subject, and 10 marks as internal assessment marks for II PU.

Fresh candidates will be given full 10 marks for their internal assessments for this academic year, said R. Snehal, Director of the Department of Pre-University Education (DPUE). “We have devised this method as it has been decided to promote all the II PU students with the examination cancelled due to the second wave of COVID-19,” she said.

In addition to that, while considering SSLC marks, the two languages where students have got their highest scores will be considered. This will inflate their overall percentage while giving 45% weightage for the SSLC marks. The order states that the decision to consider only two language papers was taken as students from central boards opt only for two languages.

If candidates have appeared for three languages in Class 10 and the maximum marks of any of the papers is 125, this will be scaled down to 100 marks. After this exercise, the best of the marks in two languages will be considered and the average computed.

Ninge Gowda A.H., president of the Karnataka State Pre-University College Lecturers’ Association, said, “After a lot of deliberation, the expert committee has suggested a method that is fair and rational. Students now should not have any grouse even though the examination is cancelled,” he said.

B.R. Supreet, principal of Oxford Independent PU College, said the evaluation system is very lenient. “However, we are glad that these scores will not be used in competitive examinations as the marks of even average students will be high.”