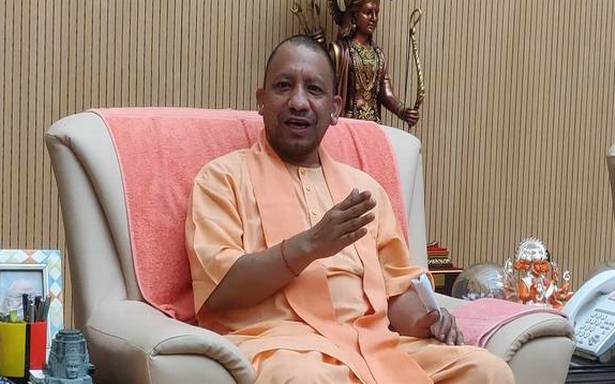 Kerala, J&K and Bengal, which claim to have better development indices than U.P., also have a high proportion of Muslim populations.

Uttar Pradesh Chief Minister Yogi Adityanath’s comment that it would not take much time for U.P. to become Jammu and Kashmir, West Bengal or Kerala if voters committed a mistake, set off a political storm on Thursday, drawing sharp reactions from former Congress chief Rahul Gandhi and Kerala Chief Minister Pinarayi Vijayan.

Mr. Gandhi, who represents Kerala’s Wayanad Lok Sabha seat, tweeted to say that the spirit of India, representing a union of States, people, cultures, languages and their diversity should not be “insulted”.

Mr. Vijayan tweeted to say that if U.P. turned into Kerala, it will not only enjoy better education, health services and living standards but also have a society in which “people won’t be murdered in the name of religion and caste”.

West Bengal Chief Minister Mamata Banarjee, who has campaigned for the alliance led by Samajwadi Party leader Akhilesh Yadav in U.P., didn’t specifically react to the comment but asserted that her government had done more for the the poor than U.P. and questioned Mr. Aditynath credentials of being a sadhu (seer).

Kerala, J&K and Bengal, which claim to have better development indices when compared with U.P., also have a high proportion of Muslim populations. The U.P. Chief Minister, however, didn’t specifically mention any particular community.

The debate involving different States comes just days after Mr. Gandhi and Prime Minister Narendra Modi had exchanged sharp words in Parliament over the Centre’s approach towards States. While Mr. Gandhi had accused Mr. Modi of trying to “rule the States with a stick”, Mr. Modi had accused the Congress of creating divisions in the country.

The whole controversy was triggered by a five-minute-54-seconds video of Wednesday evening in which the U.P. Chief Minister told voters that their vote was a “blessing” for his “penance of five years” and asked them to also keep in mind that this “vote will act as a guarantee for your bhay-mukt jeevan (life free of fear)“.

“Be careful. If you err, water will be poured over the hard work of the last five years. And this time, U.P. will not take much time to become Kashmir, Bengal or Kerala,” Mr. Adityanath said in the video message.

“If UP turns into Kerala as @myogiadiyanath fears, it will enjoy the best education, health services, social welfare, living standards and have a harmonious society in which people won’t be murdered in the name of religion and caste. That’s what the people of UP would want,” the Kerala Chief Minister retorted.

In a statement later, Mr. Vijayan pointed out how his State led the country in most indicators of development, including education, health, sanitation, religious harmony, life expectancy, gender equality, income, and social security. Such achievements had been validated by the Centre as well as its various agencies in its surveys. Among the various indices, the State was found to have the least poverty by NITI Aayog in its Multi-dimensional Poverty Index of 2020-21. By bringing down the infant mortality rate to six, Kerala competed with developed nations such as the U.S. in this regard, Mr. Vijayan said.

Leader of the Opposition in the Kerala Assembly and Congress leader, V.D. Satheesan, also appealed to the voters of U.P. to vote and “choose plurality, harmony, inclusive development to medieval bigotry”.

In a tweet, Thiruvananthapuram MP Shashi Tharoor said U.P. would be “so lucky” if it gets “Kashmir’s beauty, Bengal’s culture and Kerala’s education”.

“Stop dividing our people on the basis of region & religion simply because you have zero achievements to ask votes on,” tweeted Congress general secretary K. C. Venugopal.

Under attack, the Kerala BJP’s K. Surendran claimed Mr. Adityanath’s view was a commentary on the alleged misgovernance that had affected Kerala’s growth, and questioned why Chief Minister Vijayan flew to the U.S. for his treatment while boasting of the State’s achievement in various sectors, including healthcare. The BJP also accused the Kerala government of adopting a soft stance towards extremist elements and failing miserably to control the spread of COVID-19 in the State.