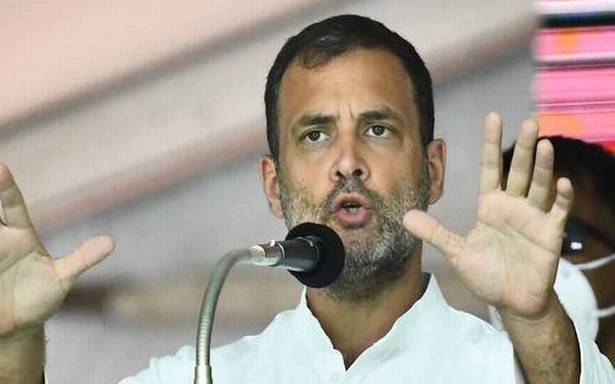 Attacking the Modi Government over the handling of the situation, Rahul Gandhi alleged it is “plainly arrogant and focuses on perception over reality”.

As India logged a world record of over four lakh coronavirus infections on Saturday, Congress leader Rahul Gandhi said the entire world is shaken by what is happening here and accused Prime Minister Narendra Modi of “dropping the ball and throwing it to states” after prematurely taking credit for having “won against COVID-19” when the second wave was already underway.

“Rely on yourself is the motto. No one will come to help you. Definitely, not the prime minister,” Mr. Gandhi said, while alleging that the COVID-19 situation has gone completely out of control for the Modi government, and wondered whether it was their way of making the states and the citizens truly ‘Aatmanirbhar’.

In an exclusive interview to PTI, the former Congress chief alleged that the government completely failed to understand or to tackle the COVID-19 pandemic, right from the very beginning, despite repeated warnings including from scientists.

Training his guns on the prime minister and Home Minister Amit Shah, Mr. Gandhi said India must be the only country in the world facing this massive pandemic without the guidance of an expert and empowered group that is charged with fighting the virus and protecting the people, with planning ahead, anticipating needs and taking the decisions that will result in swift action to save lives.

“They continuously ignored rising cases and were busy instead with election campaigns. They encouraged super-spreader events. They even bragged about them. Our Prime Minister and Home Minister were not even wearing masks in public over the past few months. What sort of a message is that sending to citizens?” Mr. Gandhi said.

He was referring to election rallies that were recently held for five assemblies for West Bengal, Assam, Kerala, Tamil Nadu and Puducherry. Leaders of all major parties including BJP and Congress participated in rallies, but decided to curtail the size of meetings and even cancelled some towards the end of the campaign for West Bengal when cases began rising more sharply.

Mr. Gandhi, who was among the first to cancel his rallies and had also urged other political leaders to do so, noted that the second COVID-19 wave is a tsunami that has brought absolute devastation and has destroyed everything in its way.

The former Congress chief termed the story of vaccine pricing in the country as one of “discount sales” and a “complete eyewash” alleging that the vaccine makers first marked up the prices and then reduced that while making a show of the entire exercise.

Asked who is responsible for the current situation, Mr. Gandhi said, “The Prime Minister is at fault. He runs a highly centralised and personalised government machinery, is solely and substantially devoted to building his own brand, is utterly focused on imagery rather than substance.” “The fact is that this government completely failed to understand or to tackle the COVID-19 pandemic — right from the very beginning, despite repeated warnings,” he alleged.

Attacking the Modi Government over the handling of the situation, he alleged it is “plainly arrogant and focuses on perception over reality”.

“Now that the situation is completely out of control, they have dropped the ball and thrown it to the states… The need of the hour is to hold hands, work together and heal our people,” Gandhi said.

Mr. Gandhi alleged that the government declared victory against the virus too soon and that this was “absolute insanity” and demonstrated a complete misunderstanding of the nature of what this virus was.

The only way to fight Corona is with humility and by realizing that you are faced with a relentless opponent, who can adapt and is very resilient, he said, noting that the prime minister had an entire year to better prepare, to protect India, and to think through this crisis but did nothing.

“The Modi Government was both grossly negligent and blindly overconfident. The BJP announced the end of the pandemic and congratulated the Prime Minister for his ‘success’ even as the second wave was just beginning. The Prime Minister himself is on record as having said that India had successfully fought the pandemic and won. In reality, there was no coherent strategy,” he said.

The former Congress chief said the only solution we have is vaccination and India is supposed to be the largest manufacturer of vaccines in the world.

“And yet, India is desperately short of vaccines. We are making them, why were our people not the first in line to be vaccinated? If that is not a failure to plan and execute, what is?” Mr. Gandhi said since the start of the pandemic in 2020, he warned the government about the disaster ahead if urgent steps to prepare were not taken, but they attacked me and ridiculed me.

“It’s not just me — anyone who tried to sound the alarm, the state callously and thoughtlessly ignored,” he said.

He alleged that the Modi Government let this virus enter India through our airports in February and March of 2020 and then it panicked and without consultation or thought imposed the world’s harshest lockdown.

Mr. Gandhi alleged that this is a government that wants to control everything. “When cases went down, they declared victory, and the Prime Minister took all the credit as he always does. Now that the situation is terrible, why are you blaming the states?” He said Congress is willing to support the government in this crisis, but the problem arises when the government doesn’t believe in consultation, in carrying everyone along, in tapping expertise it lacks.

“This government seems to think that acknowledging help is needed is a sign of weakness. The hubris and pettiness of this government is unbelievable,” he said.

On the Madras High Court recently accusing the Election of being a super spreader, Mr. Gandhi said the Court was echoing a widely held view.

In the past 7 years, like so many other institutions, the Election Commission of India has also crumbled and “The Court has said what it believes, I don’t want to make any further comment. Let your readers judge for themselves.” He said our institutions are a warning system — they give us feedback and information on how to respond to crisis but our institutions have been completely destroyed and taken over.

“The press, judiciary, election commission, bureaucracy – none of them have played their role of guardian/watchdog. This means India today is like a ship in a storm, sailing without any information.

“Corona is just part of the problem — the real problem is that India now doesn’t have the capacity to respond to any major crisis because of what has been done to its systems over the last six years,” he said.