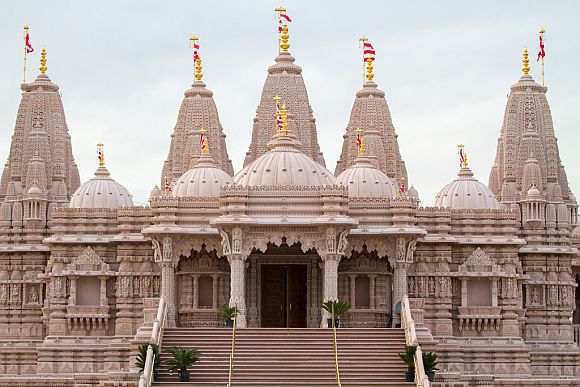 A group of Indian workers in the US have filed a lawsuit in a district court against the Swaminarayan sect BAPS, accusing it of human trafficking and wage law violations during the construction of a massive temple in New Jersey. 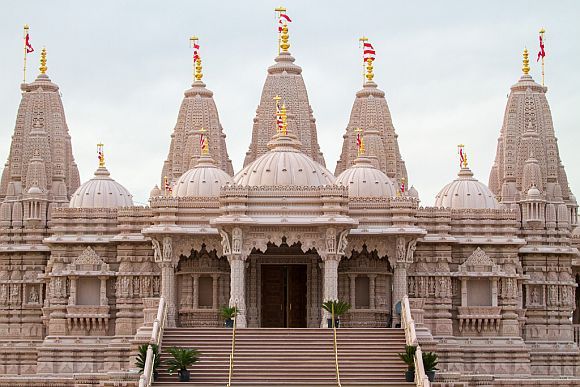 The workers alleged that they were confined and forced to work for about USD 1 per hour for constructing the massive Swaminarayan temple in New Jersey.

A report in The New York Times said that the complaint filed on Tuesday named six men who are among the over 200 Indian nationals brought to the US starting from around 2018 on religious ’R-1 visas’.

The men were made to work “gruelling hours under often dangerous conditions on the New Jersey site,” the NYT report said.

India Civil Watch International (ICWI), in a statement to PTI, said that starting in the early hours on May 11, an FBI-led raid rescued around 200 workers, ’most of them Dalits, Bahujans, and Adivasis’, from the premises of the Swaminarayan Temple in Robbinsville, New Jersey, reportedly the largest Hindu temple in the US.

The FBI said the workers have been placed in protective custody.

The NYT report said that three federal agencies — the F.B.I., the department of homeland security and the department of Labour — were involved in the action early Tuesday, ’which was said to be connected to the claims of labour and immigration law violations’.

ICWI said the complaint filed at the US district court of New Jersey alleges that the workers were threatened, confined, and forced to work on constructing the temple by the Bochasanwasi Shri Akshar Purushottam Swaminarayan Sanstha (BAPS Swaminarayan Sanstha), BAPS Robbinsville LLC, and BAPS Fellowship Services.

The complaint lists allegations including ’forced labour, trafficking with respect to forced labour, document servitude, conspiracy, and confiscation of immigration documents with the intent to engage in fraud in foreign labour contracting’ as well as failure to pay minimum wage.

ICWI said the workers were being paid USD 1.2 per hour, well below the current US federal minimum wage of USD 7.25 per hour, and below even the minimum wage going as far back as 1963.

’Further, the workers’ already meagre wages were illegally docked for taking brief breaks or smoking, and workers were told additional sums would be deducted if the workers spoke to outside people or left the temple’s premises,’ ICWI said.

The NYT report said the workers “lived in trailers hidden from view and had been promised jobs helping to build the temple” in Robbinsville with “standard work hours and ample time off.”

However, the workers did manual labour on the site, “working nearly 13 hours a day lifting large stones, operating cranes and other heavy machinery, building roads and storm sewers, digging ditches and shovelling snow, all for the equivalent of about USD 450 per month. They were paid USD 50 in cash, with the rest deposited in accounts in India.”

Kanu Patel, the chief executive of BAPS, told NYT that ’I respectfully disagree with the wage claim.’ He noted that he was not in charge of day-to-day operations at the site.

Lenin Joshi, a spokesman for BAPS, also disputed the accusations, saying the workers did complicated work connecting stones that had been hand-carved in India, the NYT report said.

’They have to be fit together like a jigsaw puzzle. In that process, we need specialised artisans. We are naturally shaken by this turn of events and are sure that once the full facts come out, we will be able to provide answers and show that these accusations and allegations are without merit,’ Joshi said in the report.

D . Roja Suganthy-Singh, president of Dalit Solidarity Forum and executive committee member of ICWI, said in a statement that ’bonded labour has been the defining feature of the caste system in India. This case shows that these practices of forced labour, to which Dalits, Bahujans, and Adivasis have been made structurally vulnerable, have also travelled to US shores.

‘Ironically, a key aspect of the caste system has been the denial of entry into temples for those from underprivileged castes.’

Anil Wagde of the Ambedkar International Center, USA said the ’actions of BAPS and its representatives and employees not only constitute crimes against humanity, but also add to generations of oppression and persecution of formerly untouchable castes. Caste-based atrocities occur daily in India. We are pained to see yet another example of how rampant it is in the Indian community in the US. Moreover, the sheer scale of this is shocking.’

The NYT report added that Daniel Werner, a lawyer in the wage claim suit, said he believed this could be the first forced-labour case of its magnitude in the US since 1995 when dozens of Thai garment workers were found working in horrible conditions in California.

Claims have been brought against the BAPS Swaminarayan Sanstha and its partner organisations under the Trafficking Victims Protection Act (TVPA), and the Fair Labour Standards Act (FLSA), as well as New Jersey wage and hour laws, and New Jersey common law for massive underpayment of wages to these workers.