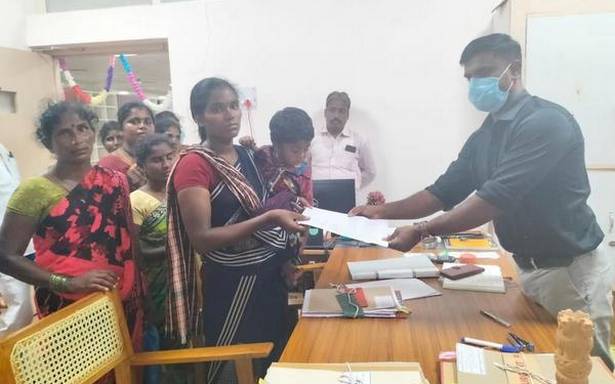 A 22-year-old woman from the Malai Kuravar tribe has petitioned the district administration alleging illegal detention of her husband and four other relatives by the Chinna Salem police since Monday.

In the petition submitted to Collector P.N. Sridhar’s personal assistant Suresh on Tuesday, Bhuvaneshwari of Thillai Nagar complained that a team of policemen in plainclothes from the Chinna Salem police picked up her husband Prakash, 25, and relatives Dharmaraj, 35, and Selvam, 55, on Monday night.

She claimed that they were sleeping in the house when the team knocked on the door and took the trio away in a police van. All pleas by his family to the police to at least tell why they were being picked up fell on deaf ears, Ms. Bhuvaneshwari said in her petition. Activists pointed out on Twitter that this brought to life scenes from the recently-released Suriya-starrer Jai Bhim. “When I went to the police station, they were not in the precincts of the station and they were detained illegally. The police again came to Thillai Nagar and picked up two other relatives — Paramasivam, 42, and Sakthivel, 29,” she said.

When contacted, a police officer said Dharmaraj, Prakash and Sakthivel were involved in 13 cases of house break-ins and thefts in areas within the jurisdiction of Chinna Salem, Kilkuppam, Kacharapalayam and Kallakurichi town police stations. The fingerprints of the trio matched with the samples and they confessed to their involvement in the thefts. About 38 sovereigns of jewellery were recovered from them. They would be produced before a court today for remand while Paramasivam, 46, and Selvam, 52, have been let off.

Meanwhile, a fact-finding report, by Witness for Justice, a non-governmental organisation based in Madurai, accused the police of framing the names of Prakash and Dharmaraj in 13 cases each.

K. Jeyasudha, Executive Director of Witness for Justice said that based on eyewitness accounts, a team of 10 policemen in plainclothes had barged into the house of Prakash on November 14 and forcibly took the trio in a police van.

She said that in addition to foisting of cases, various forms of torture were still practised as a means of criminal investigation by the police, especially against those belonging to the Malai Kuravar tribe. The State Government should issue a circular to all police stations to stop such methods of torture and initiate stringent action against police personnel resorting to the practice.

The Government should also ensure that cases were not filed against the tribes based on mere suspicion, she said. Witness for Justice also demanded installation of CCTVs in all police stations across the State.