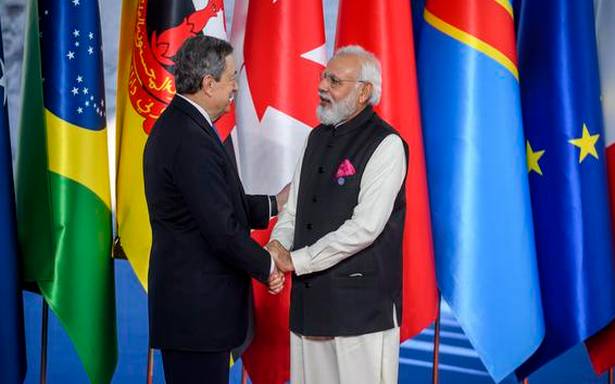 In a major turnaround, the Government has decided to lift its ban on the Italian defence company involved in the AgustaWestland VVIP helicopter deal just days after Prime Minister Narendra Modi’s meeting with his Italian counterpart Mario Draghi, sources confirmed here. The lifting of the ban would lead to a “relaunch” of ties between the two countries, said the Italian envoy. Over the past few years, bilateral relations have been held up over the helicopter case as well as the case of the Italian marines accused of killing Kerala fishermen, and Mr. Modi’s first visit to Rome has seen the formal burial of both issues.

The ban imposed on Italian defence firm Leonardo SpA has been lifted with certain conditions, a defence official confirmed to The Hindu. When asked, Italian Ambassador Vincenzo De Luca said that the matter had been discussed during the Prime Minister’s visit, where he was accompanied by External Affairs Minister S. Jaishankar and National Security Adviser Ajit Doval. According to one Government source, the ban had impacted the Navy in particular, as it is in need of an alternative supplier for “heavy weight torpedoes".

“We have still not received confirmation of the decision [to lift the ban] by the Indian Government,” Mr. Luca said in response to a question from The Hindu.

“However it is a signal of the relaunch of the partnership of the two countries, on that is based on reinforced multilateralism, cooperation against the pandemic, energy transition, and defence ties,” the Ambassador added.

The Prime Minister’s meeting in Rome also followed a few months after India formally dropped all charges against Italian marines Massimiliano Latorre and Salvatore Girone, and the Supreme Court agreed to close criminal proceedings on the basis of a decision by the International Tribunal for the Law of the Sea. Italy also paid ₹10 crore in compensation for the fishermen mistakenly shot dead by the marines aboard the Enrica Lexie ship in 2012, and most of the money has been disbursed to their families in Kerala.

In an interview to The Hindu, Mr. Luca said that with all “pending issues resolved”, the two countries would intensify work on the “action plan” that had been agreed to during the India Italy virtual summit in November 2020 between Mr. Modi and the then Italian PM Giuseppe Conti, which included clean energy transitions “at the centre of the conversation”.

“The leaders called for growing investments in the two countries. Italy and India enjoy a robust economic relation that has remained strong also throughout the pandemic,” the Ambassador said, adding that Italian companies had agreed to at least 14 new investment projects in India during the period of the COVID-19 pandemic alone.

“The two leaders also agreed on the possibility to strengthen the cooperation in the defence sector and on the need to continue high-level visits between the two countries by planning to meet again soon,” he added, indicating that a visit by Mr. Draghi could be expected either in 2022 or in 2023, when India will host the G-20 summit.

When asked about the outcomes of the G-20 summit in Rome, concluded last week, the Italian envoy said that the economic outcomes, including the plan to achieve 40% vaccinations of the global population by the end of 2021 were significant and the agreement on a global minimum tax on corporations was “historic”.

“Among other results, [the G-20] recognised the final political agreement to address the tax challenges arising from digitalisation of the economy as an historic achievement to establish a more stable and fair international tax system. India contributed significantly to this particular aspect,” Mr. Luca added.