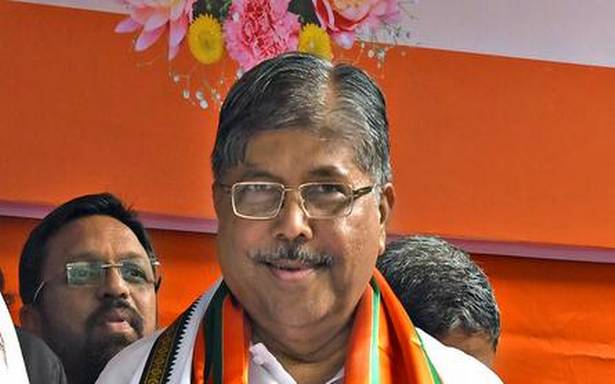 The State saw its highest single-day tally of over 40,000 COVID-19 cases on Sunday

A day after Maharashtra’s highest single-day tally of over 40,000 COVID-19 cases prompted Chief Minister Uddhav Thackeray to direct the authorities to prepare for a possible lockdown, the Opposition Bharatiya Janata Party (BJP) made it clear that it would strongly oppose such a move.

Speaking in Pune on Monday, BJP State president Chandrakant Patil said that a stringent lockdown would be calamitous for the lakhs eking out a precarious existence in the State’s unorganised sector. “Lockdown is not an option at this stage. We [the BJP] are going to oppose such a move with all our might. And not only us, but ordinary traders and labourers will be vehemently oppose it. You can take whatever steps you may wish to check the spread of the contagion, but those living a hand-to-mouth existence will fight this measure tooth and nail,” Mr. Patil said.

Such a move would be counter-productive at a time when the State’s beleaguered economy was picking the pieces, the BJP leader reiterated. While precautionary curbs were in order, a stringent lockdown was out of the question. “And if the government is bent on imposing one, it must make provisions to give a minimum monthly stipend of ₹5,000 per labourer working in the unorganised sector. Only if the State government can deposit this amount directly to their bank accounts, should it think of urging labourers to sit at home,” said the MLA from Kothrud in Pune.

With the State reporting an average of 30,000 cases daily for the last ten days, its active case tally had soared above the 3.30 lakh-mark.

Meanwhile, reacting to the buzz over an alleged meeting between NCP Chief Sharad Pawar and Union Home Minister Amit Shah in Ahmedabad, Mr. Patil said the strenuous clarifications being issued by senior leaders of the Uddhav Thackeray-led tripartite Maha Vikas Aghadi (MVA) about “smooth relations” between the three coalition allies were proof that all was not well with the government.

Mr. Patil said it was not unusual in the country’s political tradition for leaders of opposite parties to share moments of bonhomie. At the same time, he disclaimed knowledge of what had transpired in the alleged meeting.

The BJP chief was specifically responding to Sena MP and spokesman Sanjay Raut’s clarification that there was no such meeting between the two leaders and that all was well with the MVA’s functioning.

The NCP too denied denied on Sunday that a meeting had taken place between Mr. Pawar and Mr. Shah, while accusing the BJP of “rumour-mongering”.