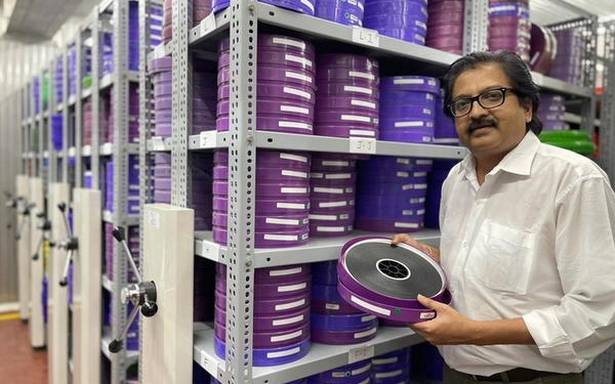 The prints, which are in the 16mm and 35mm format, also contain some important Hindi films.

In a major acquisition of vernacular cinema classics, the vaults of the city-based National Film Archive of India (NFAI) have added 89 film prints, a significant number of them from the ‘Golden Age’ of Marathi cinema.

The highlight of this collection is two rare Marathi films – the historical Tai Teleen (1953) and Pavanakathcha Dhondi (1966) which were considered to be hitherto lost, informed Prakash Magdum, Director, NFAI.

Pavanakathcha Dhondi was notable for being produced by Usha Mangeshkar and had starred renowned Marathi stars Jayashree Gadkar, along with brothers Chandrakant and Suryakant, who played on-screen brothers in a rare instance.

The film was based on the popular novel by eminent litterateur G. N. Dandekar and the music was composed by Hridayanath Mangeshkar.

Another highlight of the collection is a famous Ram Gabale directed film, Dev Pavala (1950). The film starring D. Malavankar and Vishnupant Jog was shot at the iconic Prabhat Studio in Pune.

The prints, which are in the 16mm and 35mm format, also contain some important Hindi films.

“The collection includes 23 black-and-white Hindi films, a number of which are aesthetically and culturally significant. These include Shakti Samanta’s Naughty Boy (1962) with Kishore Kumar as the Hero, Mohan Kumar’s Aman (1967), which features rare cameo appearances by Ghazal maestro Jagjit Singh and philosopher Bertrand Russell. Other notable titles include Guest House (1959) by Ravindra Dave and Taj Mahal (1963) by M. Sadiq,” said Mr. Magdum.