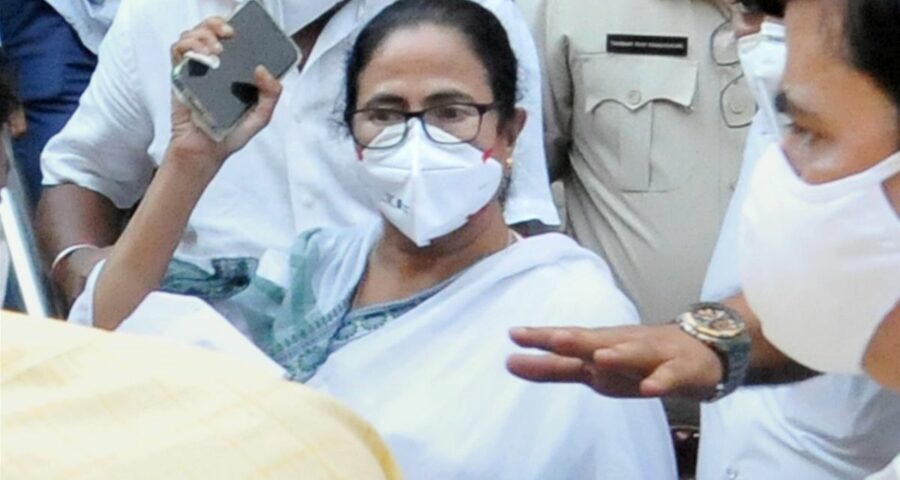 In case the EC doesn’t hold elections within six months, the duration in which Banerjee has to become an MLA to remain chief minister, the Trinamool Congress is ready with Plan B, reports Aditi Phadnis.

Within six months of being sworn in as chief minister, Mamata Banerjee must become a member of the legislative assembly.

Which seat will she choose? And more to the point, will the Election Commission of India facilitate an election?

At least three choices are available to her immediately.

Elections were countermanded in the Shamshergunj and Jangipur assembly constituencies where candidates succumbed to Covid-19 (elections to the West Bengal assembly were held on to 292 of the 294 seats).

And in Khardaha, the Trinamool Congress candidate, Kajal Sinha, died of Covid after she was declared elected. So, the seat is now vacant.

The expectation is that they will be asked by the party to retain the Lok Sabha seat and resign from the assembly. That will lead to two more vacancies in six months.

But the task of holding an election falls on the EC.

According to the Constitution and the Representation of Peoples Act, elections to the vacancies in the assembly or the Lok Sabha must be held ‘within a reasonable period of time’.

Sources in the EC’s legal department say that before 1996, there was no time limit to hold by-elections. It was for the EC to determine when they should be held.

In that sense, it was open-ended. But in August 1996, the obligation has been cast upon the Election Commission to hold by-elections within six months, say the sources, citing Section 153 of the Representation of People’s Act.

A former Election Commissioner says the law lays down that if a person elected as leader of the biggest legislature party in the assembly is yet to become an MLA, he or she can write to the EC, announcing his intention to contest from a vacant seat.

Alternatively, a colleague can resign from a seat to facilitate the election. Either way, the EC has to take cognisance of the recommendation from the state government to hold elections.

One reason an election can be delayed is if the electoral rolls are not updated.

In this case, however, as the state elections have just been held, there is no justification to delay.

“After all, it is the job of the EC is to hold elections,” he says. “Not delay them.”

However, in the past, the EC has had to be coaxed and sometimes ordered to hold elections and several Supreme Court orders testify to this.

At the other end of the spectrum, today, amid a pandemic, the EC is buffeted by all kinds of court orders: One set asking it why it felt necessary to hold elections; another asking it why it was preventing holding elections.

Just recently, the EC announced postponing the by-elections to a clutch of assembly and Lok Sabha seats, citing Covid concerns.

Last year, in Maharashtra, Chief Minister Uddhav Thackeray came to a point where he almost had to give up the chief ministership of the state.

He had opted to stay out of the assembly elections and needed to get elected to either House within six months of the Maharashtra Vikas Aghadi (MVA) coming to power.

In May 2020, elections were finally held to the Maharashtra legislative council where Thackeray was elected unopposed.

But it took two recommendations from the state cabinet (April 20 and 27, 2020) to Governor Bhagat Singh Koshyari that Thackery should be nominated to the Upper House.

Finally, it was Prime Minister Narendra Modi, responding to a call from Thackeray personally, who persuaded the governor to recommend to the EC that the election be held.

To be sure, the EC will not be acting unconstitutionally if it suspends by-elections. As per Section 151 (A) of the Representation of People’s Act, there are two provisos.

One is that the EC may ‘not hold elections if the commission in consultation with the central government certifies that it is ‘very difficult’ to hold elections.

In that case, what happens to Mamata Banerjee? Does she need to keep a Plan B in place?

Most observers of Bengal politics say the TMC is ready for that eventuality.

“The tickets in this election were — largely — decided by Abishek Banerjee (Mamata’s nephew and eminence grise in the TMC) and election strategician Prashant Kishore. The party will recognise Abhishek if it comes to that,” one of them says.

In 1997, Rashtriya Janata Dal chief Lalu Prasad had to resign from the chief ministership of Bihar following a charge sheet in the fodder scam case and he appointed his wife, Rabri Devi, chief minister although she had no prior experience in politics.

The situation is vastly different in West Bengal. But it is the EC that calls the shots.