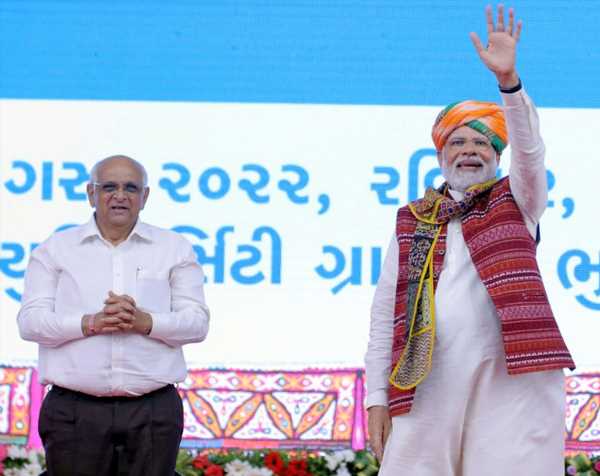 Gujarat voters, spoilt for choice, are eagerly waiting to see what the BJP will offer them.

After the Congress and the Aam Aadmi Party announced a raft of pre-poll promises in Gujarat, the big question is whether the ruling Bharatiya Janata Party, too, will follow suit with its own set of sops to woo voters and retain grip on power.

According to political analysts, parties are making big promises because they are not giving anything from their own pockets and these measures are eventually funded from taxpayers’ money.

The Bharatiya Janata Party has so far taken the stand that it was not in the race of giving “freebies” to people and warned voters to be wary of the AAP’s promises.

The AAP is a relatively new entrant in Gujarat’s electoral politics and its entire campaign is rooted in making promises to a wide range of voters in a bid to upstage the BJP and put up a robust performance in the year-end assembly polls.

Delhi Chief Minister and AAP convener Arvind Kejriwal has anchored his party’s campaign around a slew of sops like 300 units of free electricity per month, free education in government schools, unemployment dole, Rs 1,000 allowance to women and monthly stipend to new lawyers, among others.

In fact, Kejriwal has been making at least one new “guarantee” to voters every time he visits Gujarat.

In an attempt to checkmate the AAP, the Congress has come out with its own list of pre-poll promises to attract electors and end its long stint in the Opposition.

Congress leader Rahul Gandhi, addressing a rally during his visit to the state a few days ago, promised that his party will give to people all the “freebies” offered by the AAP so far.

Besides, he also promised to provide LPG cylinder at Rs 500 (instead of around Rs 1,000 now), compensation of Rs 4 lakh each to the kin of COVID-19 victims and loan waiver of up to Rs 3 lakh to farmers.

Now, all eyes are on the BJP and big question is whether the saffron outfit, in power in Gujarat for more than two decades, too, will join the race of promising “freebies” to win over voters or chart a different course.

Gujarat voters, spoilt for choice, are eagerly waiting to see what the BJP will offer them.

“We have got a choice this time for giving our votes to whoever promises more. The final choice will become difficult due to promises and counter-promises by parties,” says Komal Chidwani, an Ahmedabad resident, and wonders what the BJP will offer.

She will have to wait till the BJP releases its manifesto.

“All parties have been extending the carrot of freebies. The BJP has done this in the past. Parties are not giving anything from their own pockets so it is easy for them to make big promises,” political analyst Hari Desai said.

He maintained the BJP and the Congress have a history of making promises to voters to win their support.

“The BJP says they are giving free (COVID-19) vaccine, free ration to the poor. They did it from taxpayers’ money. The Congress, when it was in power, waived farm loans and gave many other freebies,” he said.

“Look at the position of the Punjab government under the AAP which started the race of announcing freebies in Gujarat. They are not able to give salaries of government employees (in Punjab) on time,” Desai said.

Desai advised voters to be careful and not to get “fooled” by pre-poll promises of political parties.

“Our parties do not believe in building robust economies in states and at the national level. These freebies are funded from taxpayers’ money. The thing is all political parties are trying to fool people and they expect to win votes in return,” he said.

The BJP has so far maintained it was not in the race of giving “freebies” to people and also advised voters to be wary of the Kejriwal-led party.

“Promises by a visitor (Kejriwal) to Gujarat are like Chinese products. How long they will last is a question mark,” state BJP president C R Patil has said in the past.

The BJP, seeking a fresh term in office and to maintain its iron grip on Gujarat, said its welfare measures are based on prevailing situation.

He said the AAP and the Congress are not going to come to power despite their long list of pre-poll promises to voters.

“Both the Congress and the AAP are not going to come to power in the state so they are making extravagant promises. They do not have to give anything from their pockets, it is people’s money in form of taxes, that they are promising to give free to people which is bad economics,” Vyas said.

The AAP has said the Congress should first implement the promises it has made to voters in Gujarat in states where it is in power.

“Rahul Gandhi made a lot of promises in Gujarat when he came here last Monday. The Congress should first implement all the promises made in Gujarat in states that they are ruling at present,” state AAP spokesperson Kaileshdan Gadhvi said.

“The AAP has fulfilled all the promises that we have made in Delhi and Punjab (states ruled by the party),” he said.

The Congress, countering the AAP, said whatever sops the party has promised in Gujarat, like farm loan waiver of up to Rs 3 lakh, have been implemented in the past in states ruled by it.

A scheme offering free medical treatment of up to Rs 10 lakh to people is already operational in Rajasthan, the party said.

“The AAP is a B team of the BJP. The BJP knows they are not going to win Gujarat this time and that is the reason they have brought in the AAP here,” state Congress spokesperson Manish Doshi said.

During his frequent visits to Gujarat in the last few months, Kejriwal has announced a set of what he calls pre-poll “guarantees”.

These include free electricity up to 300 units per month, unemployment allowance of Rs 3,000, ten lakh government jobs, free and quality healthcare to all and free education in state-run schools and Rs 1,000 allowance for women if the AAP comes to power in Gujarat.

He has also promised farm loan waiver of up to Rs 2 lakh and day-time electricity for irrigation to cultivators.

Not to be left behind, the Congress has matched these AAP promises and added more sops to the list like providing LPG cylinder at Rs 500 and Rs 4 lakh compensation to the kin of those who died due to COVID-19.