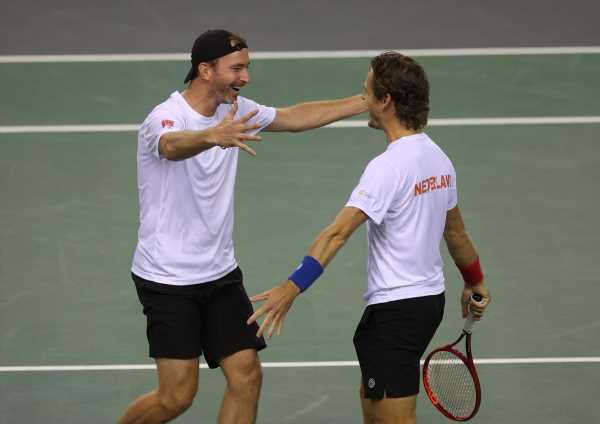 Britain were knocked out of the Davis Cup Finals as Andy Murray and partner Joe Salisbury lost a deciding doubles to Dutch pair Wesley Koolhof and Matwe Middelkoop in Glasgow on Friday.

Just as against the United States in their opening tie on Wednesday, Murray and doubles world number one Salisbury took to the court with the tie locked at 1-1.

“It just sucks, because these matches have come down to a few points and they’ve not gone our way,” Murray said. “I have been fortunate to play a lot of these matches over the years, and, come through them.

“That hasn’t happened this time around, and I feel sad about that, because… I think we had the possibility to have a really good run here.”

While the Dutch celebrated wildly at sealing their place in the quarter-finals for the first time since 2005, Britain were left with their hopes in tatters.

The Dutch pair broke serve to lead 5-3 in the decider and closed it out in nerveless fashion on Koolhof’s serve.

Earlier, Dan Evans had given Britain the lead with a comfortable victory over Tallon Griekspoor, but Cameron Norrie was overpowered by Botic van de Zandschulp.

Murray and Salisbury fell just short again, as they did on Wednesday when they lost in three sets to Jack Sock and Rajeev Ram.

The Netherlands will play the United States on Saturday to decide who wins group D, with Britain’s match against Kazakhstan now just about salvaging pride.

Two teams from each of the four groups will advance to the knockout stages to be played in Malaga from November 22 to 27.

Matteo Berrettini and Jannik Sinner, both ranked in the men’s top 15 singles players in the world, powered Italy past Argentina in group A in Bologna.

Berrettini defeated Sebastian Baez 6-2, 6-3 to give Italy the lead before Sinner sealed the tie with a 7-5, 1-6, 6-3 win against Francisco Cerundolo.

The second victory in the week sealed Italy’s spot in the last eight of the men’s competition with Sweden and Croatia vying for the other spot, having picked up one win each.

Kevin Krawietz and Tim Puetz once again became the toast of Germany, earning the hosts a crunch 4-6 6-2 7-6(5) win against the Belgian pair of Sander Gille and Joran Vliegen in Hamburg.

Krawietz and Puetz had also pulled off a tense victory in their deciding doubles rubber against France and on Friday sealed Germany’s spot in the last eight from group C alongside Australia.