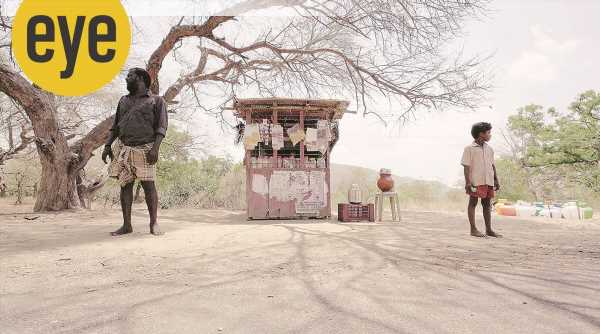 PS Vinothraj’s award-winning debut feature, based on a true incident from his life, is a story told with minimum fuss for maximum effect Koozhangal (Pebbles) is set in a landscape that is empty, bleak, arid. The earth is cracked and parched. Vegetation is scant, the trees more like stunted bushes.

Harsh sunlight reflects off a clump of jutting rocks which look as if they have been there since the beginning of time. The primal setting, in the heart of rural Tamil Nadu, is more than a character in this stunning, moving film: it is where everything wells up from.

An angry man barrels into his young son’s school, pulls him out of class, and asks him a question no child ever wants to be confronted with. “Who do you love more, your mother or me?” The little boy has no answer. His eyes, reflecting his unease and fear, do the talking. All he can do is to accompany his father — who gets steadily more enraged and inebriated — to his mother’s village.

The journey in a bus, and on foot on the way back, takes up the bulk of the film’s run-time, and we learn not just about the circumstances of the father and son, but also about the hardscrabble lives of those who belong to this area, just outside Madurai. You see families who have not known anything other than grinding poverty, cooking meals in makeshift mud kitchens under the sky. Four members of a family are busy smoking out wild rats from under the ground for a midday meal, possibly the only one of the day. Bare feet go striding across the sizzling rock-hard ground. And you remember that old blues song Ain’t got no shoes, Ain’t got no money, which comes from another time, another continent, but pain is pain, wherever in the world it originates.

Strikingly, the film stays resolutely matter-of-fact, without a hint of pathos: Koozhangal is not just heart, but brilliant craft, a story told with minimum fuss for maximum effect.

In the bus is a gathering of folks who live in and around: a blank-faced mother with a tiny baby who starts crying when there is a loud altercation, a wizened woman who is transporting pots of drinking water, and is forced to pay a separate ticket for each vessel. The trek back, as the merciless sun wheels higher in the sky, is much more arduous. It leads to a climactic point which you don’t see coming, and yet feels so apt.

Director PS Vinothraj’s first feature is inspired by an incident from his own life: his sister was thrown out of her drunken husband’s house, and had to walk miles for shelter. It won the Tiger Award at the International Film Festival Rotterdam (IFFR) in February this year, and was screened last week at the Indian Film Festival of Los Angeles (IFFLA). The self-taught Vinothraj has given us a film which is spare, sparse and yet consistently engaging. It leaves you with much to think about, about how, sometimes, a pebble can save a life.