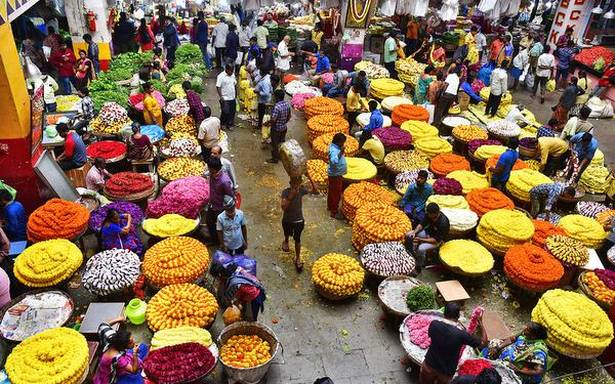 While farmers are struggling with crop loss, demand has also fallen considerably

The festival season is not bringing much cheer to either flower growers or wholesalers who were banking on volume of sales to tide them through Dasara. While farmers are struggling with crop loss, the lack of supply has done little to increase prices as demand has also dropped considerably. Since Ganesh Chathurthi, the wholesale rates of flowers have been dropping steadily as rains play spoilsport.

Most retail vendors sell flowers on the road, but have stopped doing so due to the rains. People, too, are not buying as much even when compared to 2020 when the COVID-19 pandemic was more prevalent.

Compared to last year, the rate of flowers is very low this Dasara season, said G.M. Divakar from the K.R. Market Flower Merchants’ Association. In the wholesale market, jasmine flowers are selling at just ₹400/kg, while the same time last year, a kg of jasmine commanded around ₹800. Similarly, kanakambara (crossandra or firecracker flower) is selling at around ₹200/kg, compared to ₹800/kg during the festive season in 2020. The wholesale rates for shevantige (chrysanthemum) and chandu hoova (marigold) is around ₹50-₹60 a kg.

This has come as a huge blow to growers who are struggling to cope with crop loss and low rates. According to Govind Y.D., a flower grower from Chickballapur, there has been no let up in rain over the past five years. Flowers are rotting in the plants and labourers are hesitant to harvest them, he said.

T. Bharat Gowda, a flower grower from Vijayapura near Devanahalli, said they were counting on Dasara, known as ‘Nada Habba, to make some profit. “This year, flower growers have only had losses. We can expect good rates only if the rain lets up for at least two days,” he said.

Retail vendors are hoping that business will pick up in the coming days. During the month of ‘Pitru paksha’, flower rates were lower. “During this month, no pujas are performed. There was no demand for flowers. The demand for flowers will increase towards the end of the nine-day Dasara festival, especially during Ayudha Puja and Vijayadashami,” he said, and added that it was middlemen who were making a profit, as always. “Farmers are getting a raw deal,” he said.