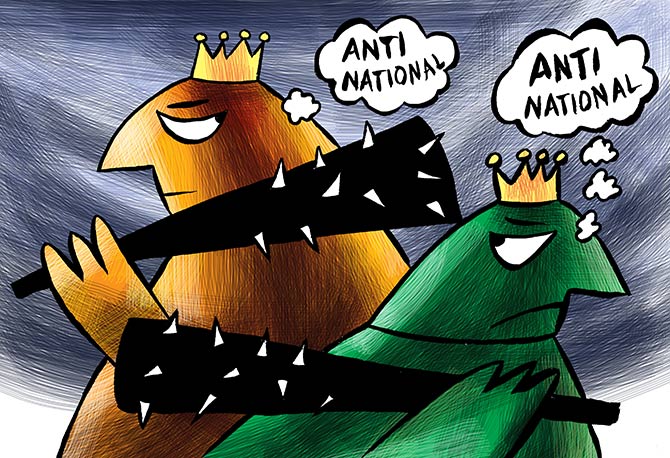 ‘Gods are deceitful too and villains can be upright upholders of the law.’
‘Perhaps political leaders of all shades would benefit from these lessons instead of declaring themselves upholders of a dharma that means different things to different people,’ points out Arundhuti Dasgupta.
Illustration: Uttam Ghosh/Rediff.com

Enemy lines are sharply drawn and communities split down the middle over political allegiances.

The gods are invoked, religion unmasks its ugliest face and there is a collective baying for the enemies’ blood.

Good is us and evil is the Other.

It is interesting to see how even present-day election narratives draw upon mythic themes of the ancient world.

Even as politicians promise change, they seem to be doing so with their faces turned backwards, dipping into primal belief systems that were shaped by a completely different context.

One of the over-riding themes of the political campaigning so far has been fear.

Terror lurks, the enemy is at the gates; therefore, the nation needs a strongman at the helm.

That is a story that the electorate needs to unpack, but the fear of the Other that has gripped us with manic intensity is as old as time.

More significantly, the bellicose response (labelling all dissent anti-national, heaping derision on people of other faiths and signalling militant aggression as the only way to teach the enemy a lesson) ignores the nuanced understanding of the ‘Other’ that the myths sought to impart.

Consider the deva-asura conflict that dates back to the Vedas.

It has been commonly interpreted as a god-vs-demon conflict, but much has been lost in this translation.

There are numerous stories about the generosity and kindness of asuras as there are about the arrogance and cruelty of the gods.

According to several texts, sur and asur are the sons of Prajapati (the universal father).

Sur are also known as devas and they inherited the power of truth from their father, while the asuras drew falsehood.

The asuras were stronger, arrogant and unable to control their desires — for food, violence, anger and love.

The gods were more measured in their ambitions.

In a story that Narada tells the Pandavas, however, the lines are blurred.

The gods led by their king Indra went to meet Shiva, but Nandi (Shiva’s bull) barred their entry.

The gods said they had come to entertain Shiva, who was known to have a weakness for the arts.

So Nandi let them in and after a while, a pleased Shiva asked Indra to ask for a boon.

To which, Indra in a somewhat defiant tone replied that he wanted to be a warrior as great as Shiva.

The boon was granted, but no sooner did they leave than Shiva expressed outrage at Indra’s disrespectful tone.

His anger took the shape of a dark cloud and appeared before him, offering to do his bidding.

From Shiva’s anger was born the asura Jalandhara, who true to the nature of his tribe, was a mighty warrior and wreaked havoc on the gods.

He was invincible and had a boon that none could conquer him as long as his wife Vrinda was faithful to him.

So Vishnu decided to trick Vrinda.

He took the form of her husband, seduced her, thereby weakening Jalandhara and defeating him.

One way to see it was how an asura was tricked by deceitful gods.

When Narada told the story, he was looking to reassure the Pandavas about how arrogance destroys even the most powerful beings but storytellers told both sides of the tale, not leaving out Jalandhara’s might or Indra’s arrogance.

Throughout the Mahabharata, arrogance as sin is a recurring theme.

It is the fatal flaw that kills Duryodhana.

It would perhaps be more apt if politicians today paid close attention to what led to Duryodhana’s fall instead of using his name as a derogatory epithet.

It will be just as illuminating to see how the storytellers of the time did not shy away from glorifying all sides in a conflict.

Bhasa, a playwright who flourished around the same time that the epic was growing popular, made him the lead character.

Duryodhana was shown to question the righteous, even the god Krishna and he often came out trumps in the debate.

In one of his plays, Bhasa has Duryodhana counter Krishna’s demand for the Pandavas by saying that neither is the legitimate heir to the throne.

Born from different fathers, none was a Kuru.

Right or wrong, it was for the readers and viewers to judge.

However, the playwrights were not killed for their words, nor were these views suppressed.

And that was the true intent of the mythic/epic narratives; to debate the principles that society ought to be formed on, not to dictate a moral code.

It was understood that gods are deceitful too and villains can be upright upholders of the law.

Perhaps political leaders of all shades would benefit from these lessons instead of declaring themselves upholders of a dharma that means different things to different people.