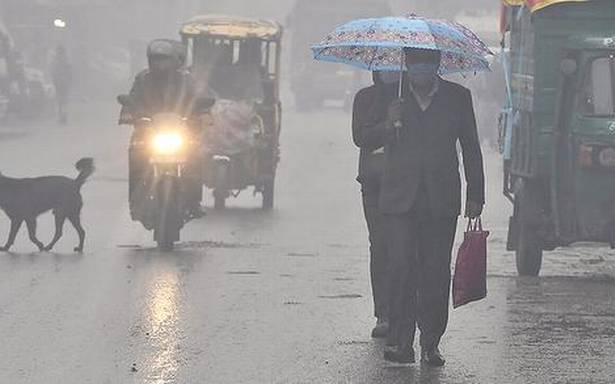 Rain lashed the Capital on Wednesday under the influence of a western disturbance and brought down the temperature. The maximum temperature settled at 15.7 degrees Celsius, which was four degrees below normal for the year, a sharp dip from the 23.2 degrees Celsius recorded the previous day.

The minimum temperature, however, climbed to 10.9 degrees Celsius, which was four degrees above normal, rising from the 8.5 degrees Celsius recorded the previous night. The weather station at Safdarjung, which is considered the official reading of the Capital, recorded 7.3 mm of rain.

The India Meteorological Department (IMD) has forecast more overcast conditions and rain in the Capital till January 9. The forecast for Thursday reads: “Generally cloudy sky with very light rain or drizzle. Moderate fog in the morning. The maximum and minimum temperatures are likely to hover between 20 and 11 degrees Celsius respectively.”

A second intense western disturbance is very likely to affect northwest India from Thursday night, the IMD said. Under its influence, an induced cyclonic circulation is very likely to form over southwest Rajasthan and neighbourhood on January 7 with high moisture feeding from the Arabian sea. The weather system is likely to bring rain across northwest and central India.