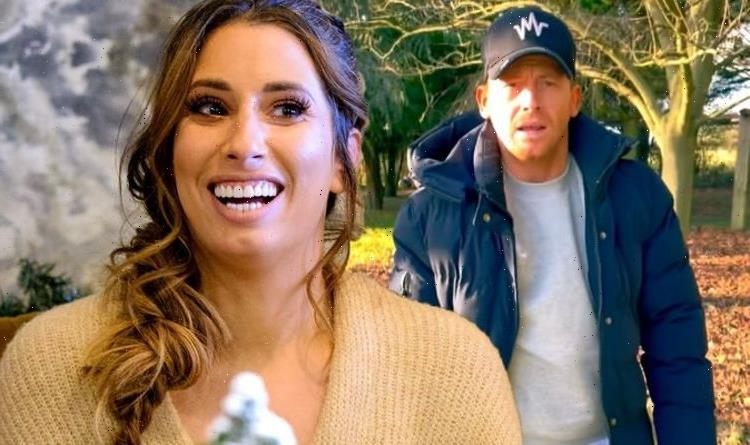 Stacey Solomon shares 'strict' rules she has at Pickle Cottage

Loose Women presenter Stacey Solomon, 32, could be seen giggling at her husband-to-be on her Instagram story today as they began digging up the garden in order to “replant their Christmas tree” for next year. Actor and former I’m A Celebrity… Get Me Out Of Here! presenter Joe Swash, 39, seemed none too thrilled with the prospect and became increasingly miffed as Stacey poked fun at his efforts.

Stacey shared a series of videos documenting her family’s busy afternoon with her 4.9 million Instagram followers.

The former X Factor star posted one clip of Joe and their two-year-old son Rex digging away in their garden.

The caption read: “We are out in the garden replanting all of our Christmas trees because apparently you can replant them and use them again next year.

“Joe’s over the moon about this information I discovered,” she added sarcastically, with a laughing emoji.

As she repeated the information in the video, Joe stuck his shovel into the ground repeatedly in frustration.

“It is going to work if you just dig a bit harder. That’s the worst hole I’ve ever seen!” Stacey added cheekily.

“I’m digging alright! What are you, site manager?” Joe responded, flinging a pile of dirt at the camera with his shovel.

In the next video, Joe could be seen tapping his shovel against something hard at the bottom of the hole he had made.

“It’s 100% a rock and peanut (their dog) is really showing him up on the digging front,” she added with laughing emojis.

“Oh my god peanut’s doing better digging than you, Joe!”

“Listen, I’ll be digging you a hole in a minute. You better shut up!” Joe fired back with a grin.

Stacey then posted a sweet picture of herself sitting in the garden with their young son surrounded by “mini Christmas trees”.

“So… We couldn’t plant the one we cut down for the living room, we could only plant the ones in pots with roots.

“The bigger ones are less likely to succeed, but are nice for birds and animals while the sun lasts.

“The baby ones my sister brought round from her Christmas decorations are more likely to grow, but need loads of water and care so I’ll let you know if any survive to next year.”

Stacey shares two children with Joe: their two-year-old son Rex and their daughter Rose, who they welcomed in October of this year.

The star also has two sons from her previous relationships: 13-year-old Zachary and nine-year-old Leighton.

In addition, Stacey is stepmother to Joe’s 14-year-old son Harry, whose mother is the latter’s ex-partner Emma Sophocleous.