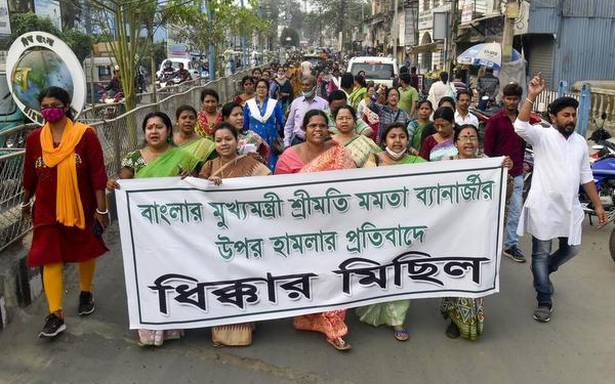 Opposition calls it a political drama; Ms. Banerjee makes no mention of attack in message to cadre.

A day after West Bengal Chief Minister Mamata Banerjee was rushed to hospital in Kolkata after suffering injuries during her campaign in Nandigram, the Trinamool Congress leadership reiterated allegations that the party chief was targeted as part of a conspiracy.

Addressing a press conference, senior leaders of Trinamool Congress, including Partha Chatterjee, Saugata Roy and Subrata Bakshi, alleged that Ms. Banerjee, the only woman Chief Minister in the country, was “purposely targeted”.

The Trinamool Congress leadership said the attack had occurred days after the West Bengal DGP was transferred and at a time the model code of conduct is in force. However, earlier in the day, in her video message to party cadre, Ms. Banerjee made no mention of a possible conspiracy.

Urging her supporters to maintain peace and not do anything that would cause problems to the public, a visibly weak Ms. Banerjee said, “It is true that I was badly hurt last night and felt severe pain in the chest and head. The doctors are looking after me.”

In his tweet, TMC MP Abhishek Banerjee said, “@BJP4Bengal. Brace yourselves to see the power of people of BENGAL on Sunday, May 2nd. Get READY!!!,” tagging a photograph of the Chief Minister in a hospital bed with her leg in a cast.

A Trinamool Congress parliamentary delegation of six MPs from both Houses will meet Election Commission officials in Delhi on Friday over the incident.

The party has also planned Statewide protests. “Tomorrow from 3 p.m.-5 p.m. we will raise black flags and cover our mouths with black bands as a mark of silent protest, condemning the incident,” Mr. Chatterjee told journalists.

However, Opposition parties in West Bengal, including the Bharatiya Janata Party, the Communist Party of India (Marxist)-led Left Front and the Congress, have dismissed Trinamool Congress’s allegation as baseless and termed the incident a political “drama” to gain sympathy votes.

State BJP president Dilip Ghosh demanded that the incident should be probed by Central Bureau of Investigation. BJP spokesperson Samik Bhattacharya pointed out that anybody with a Z plus security has at least a dozen of cars with her when she is on the move.

“If in spite of a three-layer security, the State’s Chief Minister is attacked and injured, then an investigation has to take place to find out who is responsible… We want an investigation on the incident at any cost and we want to find the truth behind what happened. The people of the State need to know what happened,” Mr. Bhattacharya said.

CPI(M) leader Tanmoy Bhattacharya raised questions on why the Chief Minister who alleged conspiracy on Wednesday has gone silent on the same issue on Thursday.