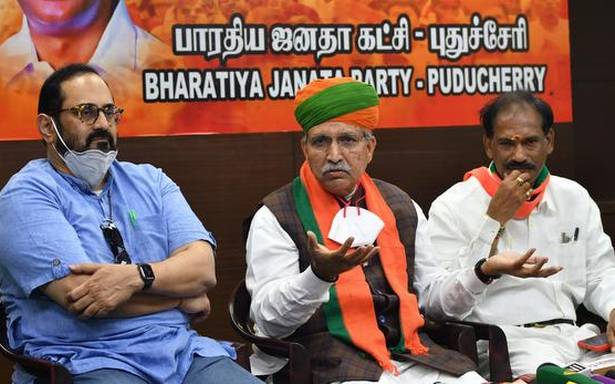 The Bharatiya Janata Party will certainly form its government after the elections, party Rajya Sabha member Rajeev Chandrasekhar said here on Saturday. “We will certainly form the government in May,” he said while answering questions at a press conference along with Union Minister of State Arjun Ram Meghwal.

Mr. Chandrasekhar was responding to a question as to whether the party and its alliance partners would stake claim for government formation in case the ruling Congress failed to prove its majority during Monday’s floor test.

When asked what makes the party so confident as they don’t have any elected representatives now, Mr. Chandrasekhar said “People want change as the present government failed to work towards the development of the Union Territory. Don’t ever ignore the power of people. The present government was only interested in fighting with Centre during the last four and a half years.”

Mr. Meghwal said a BJP government would work towards establishing industrial parks, developing textile industries and the port. Development and job creation would be the top agenda of its government, he added.

Prime Minister Narendra Modi will reach Puducherry by around 11.30 a.m. on February 25. He will lay the foundation for several development work projects, including the construction of roads, capital dredging at the Port and inaugurate completed projects.

He will also address a public meeting at the AFT ground by around 12. 30 p.m, the Minister said.