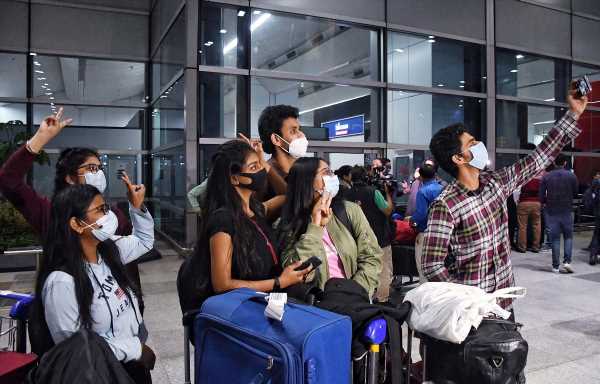 Kirtan Kalathiya, a medical university student in Ukraine, was seen chatting in Gujarati and laughing with four of his friends from his native state soon after they reached Delhi airport following a long journey from Kyiv.

Even as they were shooting the breeze close to midnight on Tuesday standing near a taxi bay, one of them kept looking at the Instagram page of Kyiv Post on his mobile phone to get the latest update on the situation in Ukraine amid escalating tensions between Russia and the eastern European country.

Most of the students PTI spoke to soon after their arrival, said they had followed the advisory issued by the Indian embassy in the Ukrainian capital Kyiv.

TV media camerapersons and reporters, virtually swooped on them, the moment they walked out of the terminal exit gates, as the inquisitive journalists wanted to know the situation in Ukraine first hand. 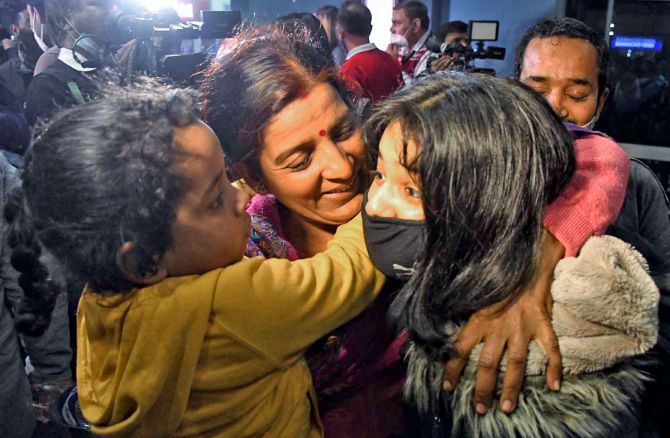 Kalathiya, 19, and his friends, Nirav Patel and Vineet Patel from Bhavnagar district, and Krish Raj and Priyansh Hudda from Surendranagar district near Ahmedabad, are first year MBBS students at the Bukovinian State Medical University in Chernivtsi, a town in western Ukraine known for its grand architectural buildings.

“We were a bit tense when we boarded our flight from Kyiv, but felt relaxed after reaching India,” Hudda told PTI.

Kalathiya, wearing a blue down jacket, joked among his friends to keep the anxiety at bay.

“We came safely from Ukraine, but at the airport, we got surrounded by media-persons soon as we came out of the exit gate. That added to our anxiety,” he said in a lighter vein, as they all shared a laugh, on a windy night in Delhi.

BSMU is an over 75 years old medical institution, and was established during the World War II. But, war is something, the Indians enrolled in universities in Ukraine, don’t want to have on their mind. 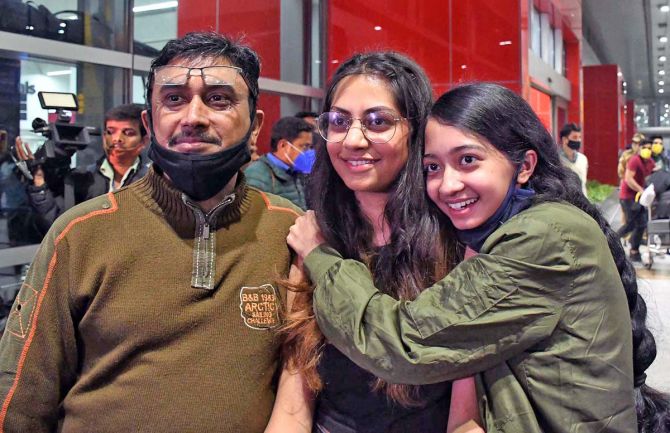 In recent weeks, tensions have been escalating between Ukraine and Russia, and on Monday, Russia recognised the independence of two separatist regions in eastern Ukraine.

On Tuesday, the Indian embassy in Kyiv again asked Indian students to temporarily leave the country amid the rising tensions.

Indian students, largely those studying medicine, soon after arrival at Delhi airport, said they were happy to be back in their home country.

While those from Delhi-NCR were home, many others waited to take domestic flights to reach their hometowns, or the Gujarati batch of friends from BSMU who will take a train on Wednesday evening to Ahmedabad, and from thereon to their respective cities.

They arrived in Delhi via an Air India flight around 11:40 pm on Tuesday.

Bhushan said he would take a flight to Bengaluru, while Dogra flew to Rajkot from Delhi in the early hours on Wednesday.

Bhushan said, “We had received the Indian embassy advisory on our official WhatsApp group. It said students should leave the country temporarily given the current situation in Ukraine, so, we followed the advisory and left.”

He also showed a copy of the advisory circulated in the official WhatsApp group. 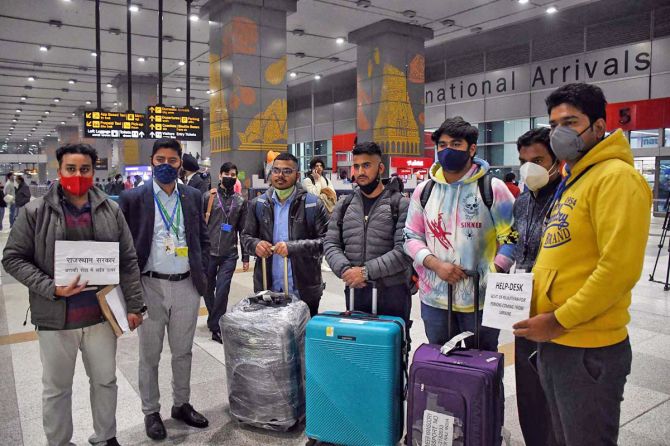 Anil Rapriya, 22, a fourth-year MBBS student at the Kharkiv National Medical University in Kharkiv city, just after landing at Delhi airport, said, “I am feeling happy to be back in my country.”

“There is nothing to panic there. I have just moved to India as the Indian embassy asked us to leave the country temporarily given the evolving situation in Ukraine,” he told PTI.

His family lives in Nangloi in Delhi.

Gurgaon-based Ratan Singh waited for the arrival of his son Shivam Chaudhury, 20, at Delhi airport with a special garland in his hand.

“My son is a second-year MBBS student in Chernobyl. This garland is especially to welcome my dear son, who, I am glad is safely coming back home, amid the tense situation in Ukraine,” he said.