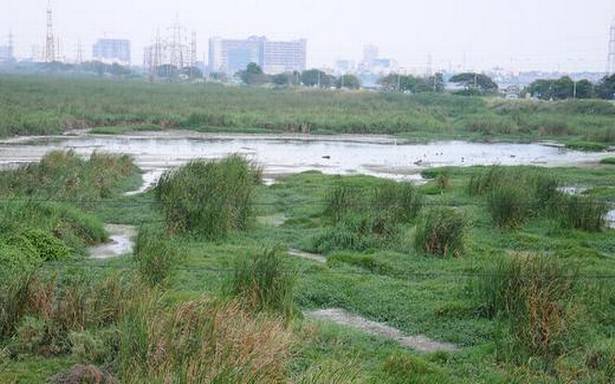 Proposal looks to reduce flooding in areas such as Perumbakkam and Semmencheri, where surplus water from various tanks spills over

Every monsoon, areas around the Pallikaranai marshland are prone to flooding owing to numerous inadequacies in surplus courses and water channels. In a bid to bring respite in the next few years, the Water Resources Department (WRD) has chalked out detailed projects to connect missing links.

While some of the proposals are awaiting funding, the department is engaged in a feasibility study for a few other projects.

Surplus water from various groups of tanks on the upstream drain into the marshland through different routes. However, most of this spills over to the neighbourhood of Perumbakkam and Semmencheri as there are no defined routes after DLF due to urbanisation.

Residents noted that some areas, like Tsunami Nagar, Perumbakkam and Karanai, were inundated during heavy rains last month. However, it was not as severe as 2015 since the WRD had taken up some works to alleviate flooding, said Satish Galley, a resident of Semmencheri. However, there was more scope to reduce waterlogging around the marshland, and the waterways should be widened and cleaned regularly. Residents should take responsibility and avoid dumping garbage and plastic material that clog waterways, he added.

Madurapakkam Odai, Ottiyambakkam Odai and the Navalur group of tanks have surplus courses that confluence at a point near the swamp. However, this portion has been converted into a residential zone, leading to flooding. The department is now taking measures to divert the floodwater through new drains, officials of the WRD said.

“It now takes at least five or six days for the water to drain. We plan to route the water to the swamp either through open drains or concrete channels,” an official said.

There are plans to divert surplus water from the Ottiyambakkam group of tanks through a 2-km channel to Arasankazhani Velanthangal tank before it reaches the point near DLF. Once the tank is filled, another channel will be created to carry the excess water to the swamp.

This proposal will divert about 2,300 cubic feet per second (cusecs) of water and provide some relief from inundation. The project submitted through the Commissionerate of Revenue Administration and Disaster Management is awaiting the Government’s nod.

Similarly, there is a missing link in Madurapakkam Odai, which drains into the swamp near DLF, resulting in floodwater spreading over urbanised areas due to lack of connectivity. “We plan to provide three small channels, totalling to a length of 1,500 m, to carry water upstream from the problematic spot near DLF and link it to Madurapakkam Odai,” an official said.

The department is also studying the feasibility of diverting the surplus of the Agaramthen group of tanks to the Perumbakkam tank and then linking it to the marshland.

Now, the floodwater from the Navalur group of 15 tanks reaches the Pallikaranai marshland as there is no proper link to Buckingham Canal. “We plan to connect the missing links in the open drain near SIPCOT in Siruseri and link it to Kazhipattur Maduvu. Surplus water will then be carried to Buckingham Canal near Muttukadu,” the official added.

Once these projects are approved, measures will be taken to improve infrastructure to channelise floodwater within a year. A minimum of 10,000 cusecs of water that spills over and causes flooding in southern suburbs could be channeled into various waterways, officials added.