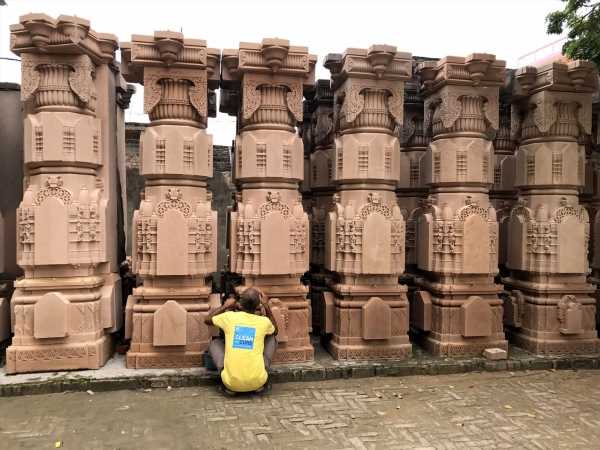 ‘The outrage that followed the destruction of the Babri Masjid was an inability to see the event for what it was: The rectification of a grave historical wrong, the restitution of a hurt of a people and the countering of moral injustice,’ argues Vivek Gumaste.

As Prime Minister Narendra Modi prepares to lay the foundation stone for the Ram Mandir on August 5, it is imperative that we take a second look at the razing of the Babri Masjid in light of the BLM movement and the Hagia Sophia controversy.

On December 6, 1992, a nation watched dumbstruck as the dome of the Babri Masjid sitting atop a site that Hindus believed was the birthplace of Lord Ram, came crashing down under the relentless onslaught of a determined band of kar sevaks.

Speaking to the nation that night, then prime minister P V Narasimha Rao remarked: ‘The destruction of the mosque is a matter of great shame and concern for all Indians. This is a betrayal of the nation and a confrontation with all that is sacred to all Indians as the legacy which we have inherited as a part of our national ethos.’

The Black Lives Matter movement has turned the spotlight on historical atrocities in an unprecedented manner with a raw, no-holds-barred perspective emerging that threatens to demolish age-old maxims and make us confront unapologetically the ugliness of yesteryear.

History is not an objective chronicle; it is a subjective, one-sided documentation of events often penned by the victors or the dominant community; a distorted recapitulation influenced by the standards of those times.

History is the narrative of the victors, not the story of the vanquished. It celebrates the glory of conquest while paying short shrift to the plight of the victims; genocides are glossed over or marginalised to make the victor more honourable; tyrants are portrayed as benevolent monarchs and evil is projected as good and vice versa.

For long we have taken the written word for granted, accepting it at face value as inviolable truth with minimal or no scrutiny.

We have remained captors of the past, prisoners of the status quo, with no courage or gumption to confront historical delinquencies.

Attempts to re-evaluate history critically, especially from the perspective of the ‘other side’, have been frowned upon as revivalism and discouraged.

The time has come to change that paradigm.

True, history cannot be changed. But we can change how we look at history. The atrocities of the past need not be accepted tamely as a fait accompli. When we perpetuate the false icons of history, we imbue them with a credibility that is not justified and a glory that is not deserved.

How we view history is vital to how we fashion our future.

The cliched argument that these icons and these misdeeds belong to an era of the past and answerable to the standards of those times is sheer poppycock. Evil is evil plain and simple and cannot be mitigated by the passage of time.

Destruction of temples or religious monuments, killings and exploitation of other humans, is wrong today and was wrong even then.

We are at a crossroads today, an inflection point in time, a rare moment when the traditionally accepted dictums of yore are being challenged with a robust counter narrative.

A moral rage is sweeping across the world; a world where the equations have changed; the slave is no longer a slave, the colonised have been decolonised, the ruled have become the rulers and colour is gradually losing its sheen as a badge of superiority.

This new generation subscribes to a new set of values that irreverently questions the doings of the past, demands restitution and course correction in human thought. That is and must be the way of the future.

The moral verve of the Black Lives Matter protests has sparked widespread rethinking across the globe.

In England the statue of a 17th century slave trader was drowned in the Bristol harbour while in Belgium, King Leopold II, a towering colonial figure, became persona non grata overnight and his statues were levelled to the ground.

But even as the Black Lives Matter movement gains traction across the world awakening the conscience of humanity, a disturbing event in another part of the world seeks to perpetuate the evils of the past — the decree to re-allow Muslims to offer prayers at the magnificent Byzantine edifice the Hagia Sophia in Turkey.

The Hagia Sophia, the most visited tourist attraction in Istanbul, was built by the Byzantine emperor Justinian 1 in the 6th century. For close to a thousand years it was the centre of Christendom and the largest church in the world. In 1453, when the Ottoman Sultan Mehmed II overran Constantinople, in the manner of Islamic invaders, he converted this magnificent edifice into a mosque to consolidate the domination of Islam over Christianity.

Today, when the razing of the Babri Masjid is viewed through the kaleidoscope of the Bklack Lives Matter movement and the Hagia Sophia controversy, the cloud of shameful questionability that had obscured our perspective then fades away to reveal a sense of confident morality.

India was way ahead of the times when it brought down the Babri Masjid. It had stood as a symbol of brutal Islamic domination over Hindu India: A monument deliberately and provocatively erected with singular schadenfreude at a site which Hindus believed to be the birthplace of their most revered god.

Sometimes logic trumps evidence and this pertinent question says it all: Of all the places in the vast expanse of north India, why was Ayodhya singled out to locate the Babri Masjid? The malintent underpinning the construction of the mosque is undeniable.

The outrage, moral indignation and vicious vilification that followed the destruction of the Babri Masjid was a false patois; a reflection of a mediocre and limited scope of mind; an inability to look beyond the immediate picture and see the event for what it was: The rectification of a grave historical wrong, the restitution of a hurt of a people and the countering of moral injustice.

The international community concurred with our domestic naysayers, branding the incident as an act of blatant majoritarianism.

The New York Times editorialised on December 8, 1992: “The central task confronting India since its birth 45 years ago has been maintaining a secular State in a multi-religious society — in short, respecting the rights of India’s vastly outnumbered Muslim minority. Yet secularism has long been resisted by Hindu militants, and still is. On Sunday, a hateful Hindu mob destroyed a mosque in Ayodhya, igniting bloodstained riots.’

These words, when re-evaluated in light of the Black Lives Matter protests and the Hagia Sophia controversy, appear hollow and puerile.

How is it that a Confederate monument that signifies black oppression can be pulled down, but a structure that hurts Hindu sentiments cannot?

And why is it that the conversion of the Hagia Sophia, an original church, into a mosque is unacceptable but a mosque perched on top of Hinduism’s holiest site is acceptable?

The irony of such warped logic and crass double standards is despicably repugnant.

In the quest for historical justice there appears to be discriminatory hierarchy. Some acts are more deadly than others: A classification based on the identity of the victim rather than the gravity of the act.

In the annals of current international debate, victimhood has a colour and that is not brown of the Hindu variety — a pointer to the deep sense of Hinduphobia prevalent among the media of the Western world.

The Hindu hurt is a tiny or non-existent blip on international consciousness being dismissed as a figment of Hindu majoritarianism. That cannot be allowed to pass and must be called out emphatically

For a truly just world we cannot have arbitrary definitions of victimhood. Caste, colour, religion or any other personal trait cannot be a qualifying factor.

Academic Vivek Gumaste, who is based in the United States, is the author of My India: Musings of a Patriot. You can e-mail the author at [email protected]