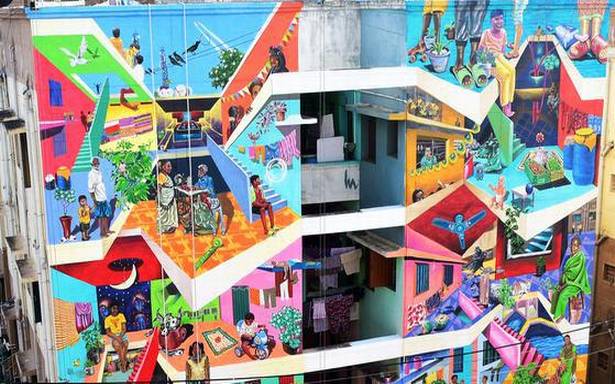 Block 10, Tamil Nadu Urban Habitat Development Board, Ukkadam, is the address to a vibrant piece of art: one that features people and objects that make up the locality

“That’s the keerai lady,” laughs Shakeela Begum, pausing in front of Block 10 of the Tamil Nadu Urban Habitat Development Board at Ukkadam. She is on her way to the grocery store and has stopped to chat with the artists.

The building is the canvas for Trespassers, a Kerala-based artists collective. They have been invited to work at Ukkadam ‘art district’, a public art initiative by St+art India Foundation, in association with Asian Paints and Coimbatore City Municipal Corporation.

Shakeela looks at the building with growing familiarity. Painted on it are her friends and neighbours: the wingless parrot seated on a blue plastic drum; the lady in a yellow dupatta buying vegetables from a grocery shop; a brown and white tabby cat that lounges on a sunshade; a goat that gingerly makes its way up a staircase…Artists Jinil Manikandan, Arjun Gopi, Pranav Prabhakaran, and Sijoy Paulose from Trespassers, have specifically picked people, animals, and objects that form the imagery of the locality as their subjects.

The artists are wrapping up their work as you read this, and have been painting on Block 10 from the beginning of this month. “We spent the first four days once we arrived, simply walking around and getting to know the place and the people,” says 26-year-old Jinil.

This was where it all began: conversations with the residents, glimpses into their houses, games with little boys and puppies that followed them around…they are all there on the wall in some form.

Jinil says that they were particularly taken in by what people said about the pandemic lockdowns. “They said it was a jolly time,” he smiles, adding, “These are small one-bedroom houses and it is impossible to maintain physical distancing. The entire building was in a quarantine bubble. They were together the whole time when the lockdowns were imposed.”

Their work is, in fact, a scene from one such day. “This was when everyday objects that were lying around the house took up new significance; people started noticing the surroundings they took for granted all along,” points out Jinil. Just then, his fellow-artist Pranav, hops off the scaffolding on which he was painting from.

A streak of white paint on his cheek, Pranav talks about the wingless parrot that is featured. “It just sits on the drum all day,” he says, pointing to the painting. The team worked without a plan. “We incorporated new characters as and when we saw them,” explains Pranav.

The artists worked with over 50 children in the locality to paint a wall at a park nearby as part of the community engagement activities of the project. Which explains why they are always surrounded by a gaggle of little boys, who comment on every new character that takes shape.

This is what Trespassers want: their philosophy is to engage with regular people through their art. “We want to take art out of the confines of the gallery space that only an elite few have access to,” says Jinil. The 12-member collective was formed two years ago, and are from various parts of Kerala.

They are all alumni of Sree Sankaracharya University of Sanskrit, Kalady in Ernakulam and have done several public art projects. “People who frequent a particular street will have subconsciously registered each object it is made of,” says Jinil.

“If say, one of our art works comes up on a building there, it will eventually become an everyday object they encounter — we will have hence ‘trespassed’ on their visual memory even without them realising it,” he adds, interpreting their collective’s name.

Does it irk that their art will eventually fade with time, dust, and sun? “Not one bit,” says Jinil. “This is part of the process. We stop becoming artists the moment our work is done,” he explains. “We are then merely spectators. We look at it with no idea of how it will eventually end up.”