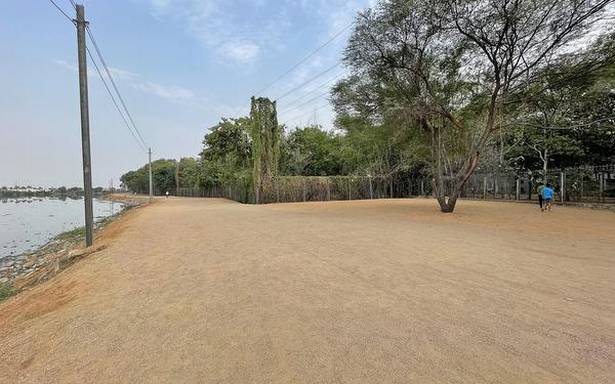 The Nacharam Lake has shrunk by an additional 15 acres after the Greater Hyderabad Municipal Corporation filled it to lay a 20-metre-wide walking track stretching to over 3 kilometres over the past four months. The amount of land filled up is bigger than the Wankhede Stadium in Mumbai. On the southern side, the width of the land filled up is more than 40 metres, ignoring the natural contours of the lake. “This was laid in three months’ time,” said a GHMC staffer guarding the site which has an attached garden. The natural rock formations inside the lake have been blasted near the weir on the eastern side of the lake, robbing it of its natural beauty that had an eight-foot-high fence running around it protecting from encroachments.

“By filling up the lake with such a wide road which the GHMC is calling walking-cum-cycling track they are annihilating the lake. The lives of people around the lake are being put at risk due to this filling up of the lake,” says environmental activist Lubna Sarwath who has moved the Telangana State Human Rights Commission against the activities of the civic body. “On the southern side, the road has been laid inside the lake dividing it into two allowing more encroachments. A private telecom company has erected poles on the road. These activities are not permitted inside the Full Tank Level (FTL) of any lake,” says Ms. Sarwath.

Hyderabad has been affected by a series of localised urban flooding due to encroachments in the FTL of lakes and construction activity on the nalas and water channels. In October of 2020, the southern part of Hyderabad witnessed massive flooding as a series of lakes broke the bunds creating havoc in large swathes of the city.

As Hyderabad prepares for another normal monsoon predicted by India Meteorological Department, it remains to be seen how the filling up of the Nacharam Pedda Cheruvu affects the surrounding areas.