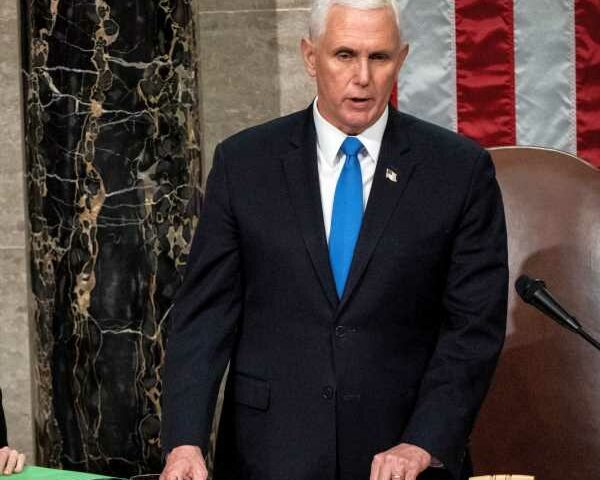 Condemning the violence at the United States Capitol by pro-Trump supporters in the strongest possible terms, Vice President Mike Pence said violence never wins, freedom does, as Congress returned to work on certifying his boss’ election loss to Joe Biden.

In an unprecedented incident, thousands of angry supporters of President Donald Trump stormed the US Capitol and clashed with police on Wednesday, resulting in at least four casualties and multiple injuries and interrupting a constitutional process to affirm Biden’s victory in the November 3 presidential election.

“We condemn the violence that took place here in the strongest possible terms. We grieve the loss of life in these hallowed halls, as well as the injuries suffered by those who defended our Capitol today. And we will always be grateful to the men and women who stayed at their posts to defend this historic place,” Pence said in his remarks as he presided over the resumption of the Joint Session of the Congress, which was disrupted after the violence.

“To those who wreaked havoc in our Capitol today, You did not win. Violence never wins. Freedom wins. And this is still the people’s house.

“As we reconvene in this chamber, the world will again witness the resilience and strength of our democracy, for even in the wake of unprecedented violence and vandalism at this capitol, the elected representatives of the people of the United States have assembled again on the very same day to support and defend the constitution of the united states,” Pence said.

Earlier on Wednesday, Trump slammed Pence for declining to illegally overthrow the results of the November 3 election, saying he lacks courage. The outgoing president’s remarks came after Pence presided over the Joint Session of the Congress to count and certify the election results, which was halted by the protesters.

Senate Majority Leader Mitch McConnell said the US Senate will not be intimidated.

“We will not be kept out of this chamber by thugs, mobs, or threats. We will not bow to lawlessness or intimidation. we are back at our posts. We will discharge our duty under the constitution and for our nation,” he said.

“We have never been deterred before, and we will not be deterred today. They tried to disrupt our democracy. They failed. They failed to attempt to obstruct the Congress. This failed insurrection only underscores how crucial the task before us is for our republic,” he said.

Senator Chuck Grassley said the violence must not be allowed to disrupt or intimidate lawmakers from performing their constitutional duty.

“I took an oath of office to support and defend the Constitution, even in the face of threats. That is the lens through which I view today’s process,” he said.

According to Senator Tom Carper, the violent mob “incited by the sitting President of the United States, waged an attack” on the country’s democracy.

“Instead of watching the ceremonial tallying of electoral votes, we saw an insurrection here in the United States of America. The blatant misinformation that Donald Trump embraces, and the white supremacists and other extremists that he refuses to disavow, have been allowed into our politics and, today, they forced their way into our Capitol,” he said.

“Make no mistake: we will not be intimidated by domestic terrorists. We will ensure our Constitution withstands this assault. The certification of the election will continue, and Joe Biden and Kamala Harris will be sworn in on January 20th. I look forward to voting tonight to uphold the will of the American people and doing my part to address the monumental challenges that our country faces going forward,” Carper said.

House Majority Leader Steny H Hoyer said the insurrection at the US Capitol complex was a “direct attack on American democracy”.

“It is shameful and despicable”, but it will not prevent the lawmakers from carrying their constitutional duties, he said.

“This is a dark day in our nation’s history, but our democracy will prevail. Joe Biden and Kamala Harris will be confirmed as the next President and Vice President of the United States. When they are sworn into office on January 20, I hope that day will mark the beginning of a new era for the American people in which we can come together as one nation and heal,” Hoyer said.

Congressman Steve Cohen, who was in the House Chamber when intruders breached US Capitol security and illegally occupied parts of the Capitol Complex, blamed Trump for the entire episode.

“He has continually pushed the false idea that the election he lost by seven million votes was ‘stolen’ from him. As recently as last Saturday, he urged the Georgia Secretary of State to ‘find’ the votes he needed to win that state.

“Trump’s sixty lawsuits, claiming without evidence that irregularities and fraud explained his loss, have been denied, including by Republican and Trump-appointed judges, and his arguments for a victory have gone from bizarre to delusional,” Cohen said.

HC cautions govt. on failure to set up SDRF
We and our partners use cookies on this site to improve our service, perform analytics, personalize advertising, measure advertising performance, and remember website preferences.Ok