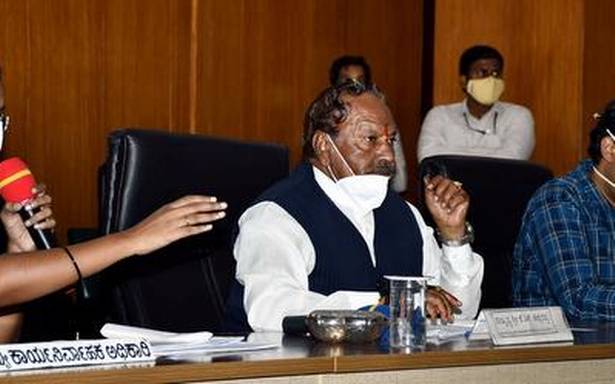 Minister tells officers concerned to book those indulging in such malpractice

Taking note of complaints about chilli seeds being sold to farmers at exorbitant prices in the black market, Rural Development and Panchayat Raj Minister K.S. Eshwarappa directed the Ballari district administration to conduct random raids on those agro traders indulging in malpractice and take stringent action against culprits.

“Ours is pro-farmer government and exploitation of farmers cannot be tolerated. The Agriculture and Horticulture departments should swiftly act upon the complaints and revert back to me immediately. Those who are found guilty of selling seeds to farmers at inflated rates should be booked under relevant laws. The members of the vigilance squad need not be present in this meeting and you should right now conduct raids,” he told the officers concerned and sent the vigilance squad members to take up the task.

Mr. Eshwarappa was chairing a meeting convened for reviewing the progress of work under his department in Ballari on Monday.

Briefing about jobs offered to rural workers under Mahatma Gandhi National Rural Employment Guarantee Act, Mr. Eshwarappa said that even those who returned from the cities to their native places during the COVID-19 situation are also being offered work under the scheme. “We are offering work to the rural population even during the lockdown to ensure that none was left wanting for income. The job scheme implementers have been clearly directed to ensure that the workers will maintain social distancing while carrying out work. Our target for last year was to have 13 crore mandays in the State and we achieved over 15 crore mandays,” Mr. Eshwarappa said.

Zilla Panchayat Chief Executive Officer K.R. Nandini told the meeting that Ballari had already created 40.08 lakh mandays against the target of one crore mandays set for 2021-22 to occupy the top position in the State.