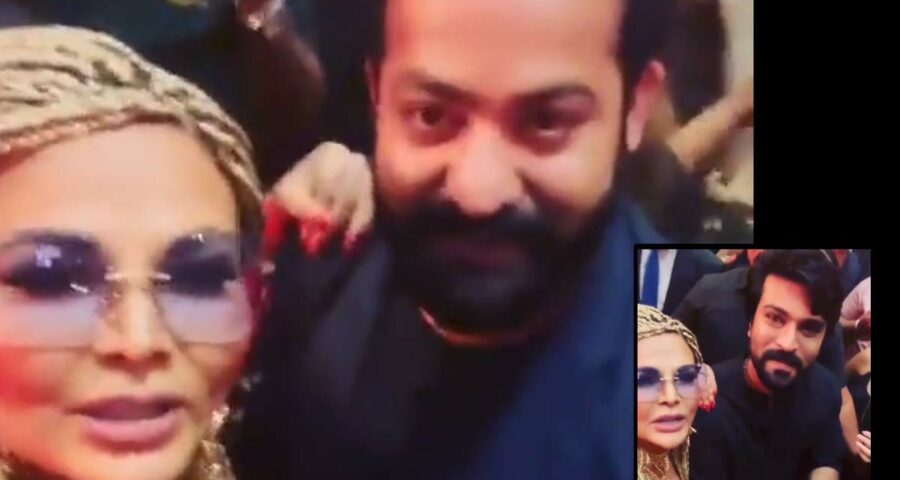 Young Tiger Jr NTR and Ram Charan are currently basking in the glory of their recently released movie RRR which is inching toward to join the club of Rs 1000 Cr marks.  The controversial queen Rakhi Sawant  was present at the star-studded success party of RRR in Mumbai and she had taken the opportunity to interact with Ram Charan and Jr NTR. Though it was a short conversation, the video of Ram Charan and Jr NTR interacting with Rakhi Sawant is going viral on social media.

Rakhi Swant congratulated Ram Charan on the huge success of  RRR and asked him “Will you please do ‘Naatu Naatu’ step with me?”,  to which Charan said no.  RRR actor said that he could not dance. Jr NTR, who was  also surrounded by hundreds of people, posed for a selfie video with Rakhi Sawant.

This humble gesture by the biggest south Indian stars- Jr NTR and Ram Charan has caught much attention.

On the otherside, Karan Johar had ignored Rakhi  Sawant whereas she was seen trying to talk to him.

RRR, bankrolled by DVV Danayya under the banner of DVVV Entertainment and helmed by SS Rajamouli, also has Alia Bhatt, Olivia Morris, Ajay Devgn and others in the supporting roles.