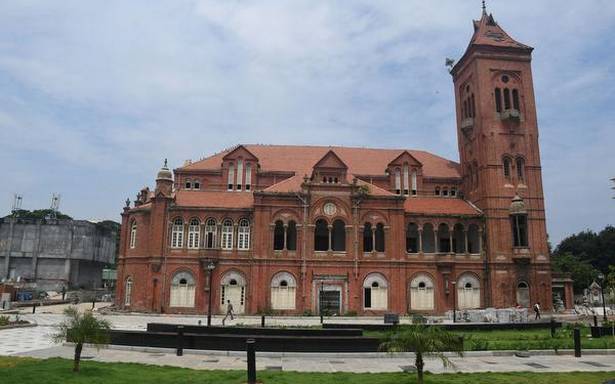 The heritage building is to be restored, and a sound and light show about Chennai’s heritage will be showcased there, officials said

Corporation Commissioner Gagandeep Singh Bedi said a 10-member committee of heritage experts had been formed to finalise all aspects of restoration of Victoria Public Hall. “Various options are being explored. But right now, we are in the process of getting the estimation of the Victoria Public Hall restoration and we will take this up under the Singara Chennai 2.0 funds,” said Mr. Bedi.

The State government has issued a government order for release of funds for Singara Chennai 2.0. “On Monday, we are calling for tenders for preparing detailed project report for heritage preservation of Victoria Public Hall. The committee will have representatives from the Archaeological Survey of India, IIT and INTACH,” said Mr. Bedi.

Municipal Administration Minister K.N. Nehru had announced that Victoria Public Hall would be restored without diminishing the heritage value of the building.

“Already, one phase of repairs has been undertaken in previous years. I have inspected Victoria Public Hall. Mr. Nehru had also inspected it about a month ago and it was decided to restore the building and for which I have formed a committee under the chief engineer – buildings,” Mr. Bedi said.

Conservation architects are expected to conserve the heritage building by reconstruction and restoration in compliance with national and international rules and principles.

The surrounding areas of the monument are expected to be strengthened to enhance the character of the heritage building. Once the restoration is completed, visitors will be able to watch the sound and light show about Chennai’s heritage, sitting on benches outside the heritage buildings.

Chennai Metro Rail Ltd. had completed the lawn on the premises. Work on stormwater drains would be completed to prevent waterlogging in the area, officials said.