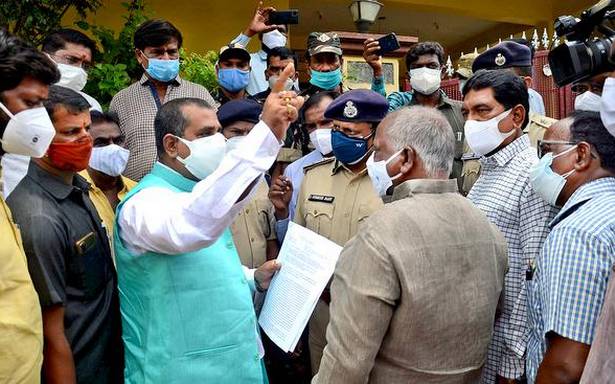 Vice-Chairman of the National Commission for Scheduled Castes Arun Haldar has assured job, housing and pension for the family members of the two workers who died after entering the sewage manhole at Padmavathi Colony, in Vanasthalipuram a week ago.

Mr. Haldar visited the site of the death of the two workers Shiva and Anthaiah on Tuesday, along with the Commission member Ramulu, GHMC Commissioner D.S. Lokesh Kumar and other officials. Later, he called on the family members of the workers at their home in Chintalbasti of Saidabad, and spoke to them.

The two workers died after entering the manhole for fixing the rope of bucket cleaning machine for de-silting works. Anthaiah went missing in the manhole, and was found almost a week later, on Monday.

Forced to action by the furore generated around the incident, government announced compensation of ₹ 15 lakh each to the families of the victims— ₹ 5 lakh of it payable by the contractor and the remaining by the government. Orders were issued suspending two officials — one Assistant Engineer and a Work Inspector, while services of another work inspector employed on outsourcing basis have been terminated. Two more officials have been transferred.

Interacting with media, Mr. Haldar said government should pay more attention to such incidents. Human beings need not be employed in such jobs, as there are machines to fulfil the task, he said. Citing the family members, Mr. Haldar said the contractor had forced the labourers to enter the manhole in the night threatening them that they wouldn’t be paid otherwise. The workers had to enter the manhole for the sake of sustaining their families, he said.

As per the SC, ST (Prevention of Atrocities) Act, the affected families will get compensation, housing, government job and a pension of ₹ 5,000, Mr. Haldar assured, and asked officials to build a water tight case so that the erring contractor gets exemplary punishment and would not be able to escape.