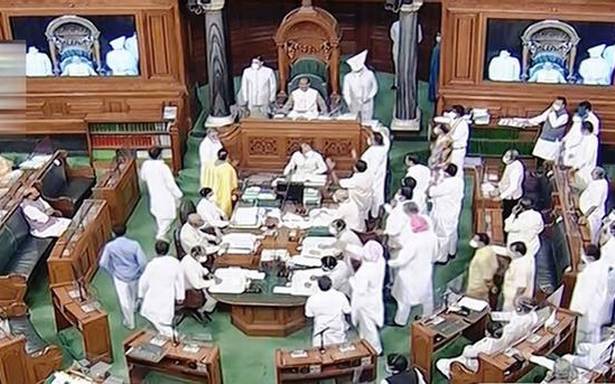 The passage of the Constitution 127Amendment Bill, 2021, saw demands for a caste-based census ring out in the Lok Sabha on Tuesday from NDA allies Janata Dal (U) and Apna Dal, apart from regional parties, with BJP MP Sanghamitra Maurya creating a flutter by lauding the Modi government for having pushed the measure through.

This at a time when the government clarified last month in Parliament, via a question to the Home Ministry, that the government had, as a matter of policy, decided not to enumerate caste wise population in the Census other than Scheduled Caste and Scheduled Tribe.

Ms. Maurya was fielded as the first speaker on behalf of the ruling party as the Bill was moved for consideration, and attacked the previous Congress governments for not ordering a caste based census.

“The last caste based census was in 1931 and the true number could not be counted now,” she said. “Your (Congress) government went for caste census in 2011 (Socio-Economic Caste Census) but did not publish it. Today the Modi government is giving them their rights,” she said.

She added that “even animals were counted but not the backward classes” and stated that a correct enumeration would help target welfare programmes better. She wound up her speech early despite being the lead speaker.

The Constitution 127 Amendment Bill, 2021 seeks to restore the power of State governments to identify Other Backward Classes that are socially and economically backward after a Supreme Court order in May 2021, which had empowered only the Central government for such identification. The amendment was thought necessary because the SC in its order on Maratha reservations upheld the 102Constitutional Amendment Act that inserted Articles 338B and 342 A (with two clauses) after Article 342, which said that the President of India, in consultation with governors, would specify socially and economically backward classes, taking away the powers of State governments to do so.

NDA allies — Janata Dal (U) president Rajiv Ranjan Singh Lallan and Apna Dal leader and Union minister Anupriya Patel — however, were clear in their demands for a caste-based census. Ms. Patel said such an enumeration was necessary to ensure representation proportional to the population for backward classes. Mr. Lallan said his party’s demand from the government was that “in the 2022 census, you should get the caste census conducted. It has not been done since 1929 and the OBCs have not got full justice.”

Samajwadi Party leader Akhilesh Yadav, Telugu Desam Party MP Ram Mohan Naidu also demanded that a caste-based census be conducted, while Dayanidhi Maran of the DMK demanded that data from the Socio-Economic Caste Census (SECC) conducted in 2011 be released soon and said the government was refusing to do so.